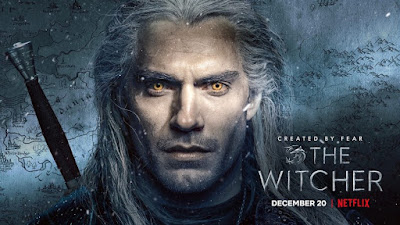 The end of Game of Thrones naturally kicked off a scramble amongst various streaming platforms to figure out what, if anything was going to be the next great fantasy television series. Netflix had Dark Crystal: Age of Resistance drop last year. Amazon has The Wheel of Time and Lord of The Rings: The Second Age coming son and there's a Willow television series in the works. If you like fantasy and are excited to finally see some of your favorite books come to the small screen or your favorite streaming platform, there's really no better to time to be alive.

Kicking it all off- (yes, technically there was a Chronicles of Shannara series which was on MTV for some reason and kind of bummed me out after a few episodes and so, I didn't really bother with it because, well, it wasnt' that good) is Netflix's adaptation of The Witcher.

I suppose I should note going into this: I've never read the books, I've never played the video games and I didn't know a damn thing about the world or the characters, so I had no idea how I would feel about it all, but thankfully, Geralt of Rivia (Henry Cavill) grabbed my attention from the very first scene and didn't let go for the next eight episodes.

The opening episode of the series sees Geralt killing a monster (kikimora) and taking it into the town of Blaviken to see if he can sell the corpse for money to the local mage, Stregobor (Lars Mikkelsen) to see if he can use the body for his potions. Stregobor, for his part, wants to hire Geralt to kill the cursed Princess turned bandit, Renfri. (Emma Appleton)  Renfri for her part, has vowed to kill Stregobor for his part in her exile. Geralt gives her an ultimatium to leave or die, but she refuses and when he rushes back into the town to stop her, he is forced to kill all her men and eventually Renfri herself. She tells him with her dying words the girl in the woods will be his destiny.

Intertwined with this story, you see The Kingdom of Cintra get overwhelmed and eventually conquered by it's southern neighbor, Nilfgaard. Her armies defeated and trapped in her keep, Queen Calanthe (Jodhi May) orders her granddaughter, Cirilla (Freya Allan) to escape and find Geralt of Rivia.

It's subtle- and it makes the pilot episode seem a bit weird at first, because the show doesn't actually come right out and tell you that the two threads of the plot are in different periods of time, but once you realize that, everything starts to click into place- the arc of the first season is about Cirilla and Geralt and the events that bring them together in the final episode- but it's also about Yennefer of Vengerberg (Anya Chalotra), a hunchback who inadvertantly triggers her magical ability and is sold to a mage named Tissaia de Vries (MyAnna Buring) by her father, who takes her to Aretuza for training in magic.

She struggles with her deformity and training with her powers, but finds love with fellow student Istredd (Royce Pierreson) along the way. Unknown to both of them, Stregobor and Tissaia are using them to spy on one another and when Yennefer is denied her preferred assignment of Aedirn because of her quarter-elvish blood and sent to Nilfgaard, she realizes that Istredd has betrayed her and goes through a painful transformation to make herself beautiful, but at the cost of her fertility- she then charms the King of Aedirn to become his advisor and Fringilla (Mim Ndiweni) is sent to Nilfgaard instead.

It's another little jarring moment for the series, but you don't quite realize how important Yennefer is- at least not at first. You think it's going to be about Geralt and Cirilla, but it's not. It's essentially a eight episode arc that serves as the origin story for all three characters that gets tied up together in the final episode so seamlessly it's almost beautiful.

The weirdness of the pilot and the time differential aside, the whole epic nature of the Fall of Cintra is probably what got me hooked on this. Geralt was amusing enough- and when he picks up a travelling companion in the bard Jaskier (Joey Batey) along the way- the song will, in fact, get into your head and never leave, I promise you that. In terms of breaking down fantasy tropes, I think The Witcher does a nice job with it's casting: there's plenty of people of color in prominent roles, which doesn't bother me a bit because folks likes Istredd and Fringilla are just awesome in their respective roles. Feels like perfect casting- (though, I've seen more of the usual suspects grumbling about The Wheel of Time casting than I've seen for anything about The Witcher, but the internet being the internet, I'm just going to assume that someone out there took to their keyboard to demand lilywhite casting, because *that's how it was in the books*.)

They also do something different with elves and dwarves that I haven't really seen before. Humans are the dominant race on 'The Continent' and elves and dwarves have been more or less displaced and are either forced out of their lands and slaughtered (in the case of the elves) or have been more or less subjugated by humans (dwarves.) Maybe I don't read enough fantasy to know for sure, but it's a stark departure from Tolkein's approach to elves and dwarves, which is something I think that has dominated the fantasy genre for a long time. (Elves: creatures of light/magic/wonder, Dwarves: live underground/have beards, etc.) I really liked that and I wanted to see more of it, which hopefully I'll get to do in Season 2. (Another minor bit of nit picking: no map. I know you can find one if you look on the interwebs, but...  you know. No map. Makes geography a little hard, but I dealt with it.)

Overall: I loved this. I've heard complaints about the structure with the time difference, but once you pick up on it, it makes sense and it all works really, really well. Yennefer's arc is an interesting one: it's interesting to see portrayals of disability on screen, but the decision to trade her disability for beauty is... perhaps problematic, but it's interesting. I would say it starts unevenly- or maybe jarringly would be a better word- but by the end, you a more than ready to toss a coin to your witcher and wish that season two would be here sooner. My Grade: **** out of ****