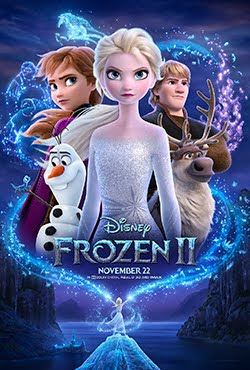 The sequel was so inevitable they weren't just going to 'let it go'. (No, I won't apologize for the prior sentence. I know y'all groaned. Hashtag Dad Joke. Hashtag No Apologies.) But unlike prior Disney sequels as the always memorable, Return of Jafar and The Little Mermaid: Return To The Sea and Pocahantas: Death by Smallpox*, Frozen II is actually an excellent continuation of the story and a welcome return to Arandelle and all these characters.

We return to Arandelle with King Agnarr telling a story to a young Elsa and Anna about their grandfather, King Runeard, who established a treaty with the Northuldra people by building dam in their homeland of the Enchanted Forest. On the day the treaty is finalized, however, something goes wrong and fighting breaks out between the Northuldra and the Arandelleans and the elemental spirits of the forest: Earth, Fire, Water and Air join the battle, eventually cutting off the Enchanted Forest from the rest of the world through a wall of mist. Agnarr was their as well, but is saved by an unknown Northuldra girl- (who, spoiler alert, turns out to be Anna and Elsa's mother.)

Flash back foward to the present and it's three years after Elsa's coronation. The gang is celebrating autumn and Kristoff seems to be getting ready to propose to Anna. Elsa starts to hear a mysterious voice calling out to her and follows it, awakening the elemental spirits who disrupt the Kingdom and force everyone to flee. The trolls arrive shortly there after and Grand Pabblie informs Elsa and Anna that they have to fix things by learning about the Kingdom's past.

So, off our heroes go to the Enchanted Forest, follwing the mysterious voice and eventually reach the borders of the Enchanted Forest. The mist parts for Elsa (naturally) and they enter the forest where they find the Northuldra and a troop of Arendellian soldiers who are still in conflict with one and other. With the help of the elemental spirits, Anna and Elsa arrange a truce between the two sides after they figure out that their mother was a Northuldrans. They also learn about a fifth spirit who will bridge the gap between nature and the people.

(And yes, I did turn to the wife and say, "you mean... a Fifth Element?" at this point in the movie. Insert your Fifth Element .gifs here.)

Elsa, Anna and Olof keep heading north (Kristoff and Sven are elsewhere singing random but delightful 80s power ballads and waiting to swoop back in at a critical moment at the end of the film) and find their parents wrecked ship and a map and a route to Ahtohallan, a mythical river that, per their mother, holds the secrets to their past. Elsa sends Anna and Olof away to safety and goes alone to Ahtohallan, to find out that (surprise, surprise) she's the Fifth Element and then she has to go to Egypt and- oh wait. Wrong movie. No, she has the magic because her mother selflessly saved her father. And finds out that Grandfather King Runeard built the dam to reduce the resources of the Northuldra and make them easier to incorporate into the Kingdom and killed the Northuldra leader to kick this whole mess off.  Elsa gets a message through to Anna just in time: take down the dam to save the Kingdom and then she freezes in the dangerous heart of Ahtohallan, which causes Olof to fade away.

Anna finds the strength to act on Elsa's message alone, which thaws her out and sends Elsa back to Arendelle to divert the flood from the wrecked dam to save the kingdom. The mist wall disappears, Elsa revives Olof, Kristoff shows back up and proposes- Anna says yes and Elsa explains that they're both the bridge between the people and the elemental spirits. Anna becomes Queen and Elsa becomes Protector of the Enchanted Forest and they all live happily ever after.

At least until the next movie, anyway.

Overall: Excellent sequel. Growth for the characters. Fresh story. Fun. I like that they took their time with this and really poured a ton of quality into it and it more than paid off. 'Into The Unknown' might not be quite the earworm that 'Let It Go' is, but it comes close- and the random and delightful detour into a full on, unapologetic 80s power ballad ('Lost In The Woods') was excellent and made me laugh out loud quite a bit. In short, My Grade: **** out of ****

*This one's fake, obviously. Though there was actually a sequel to Pocahantas where she does go to London. There's also a sequel to Hunchback of Notre Dame, because obviously, Quasimodo hasn't suffered enough per the House of Mouse.