This Week In Vexillology #288

April 27, 2019
Our tour of the counties of England continues this week and we're heading back north again to take a look at the flags of Lancashire-and we're going to do a double shot to handle Cumbria!

Let's start with Lancashire! First of all, we have to answer our now familiar question: where the heck is it? Well, I think the easiest way to describe it is that it's north of Liverpool and Manchester, west of Leeds and more or less directly southwest of Yorkshire Dales National Park. The county dates back to the 12th Century and appeared in the Domesday Book of 1086 but there were records of settlement that date back to Roman times. In terms of 'interesting things about Lancashire' I supposed I should lead with the fact that my maternal grandmother hailed from Lancashire and ended up living in Yorkshire and serving on the Leeds City Council where she took great delight in being known as 'The Bloody-Minded Lancastrian'-- which, I have to say, is honestly more interesting than anything a quick scan of the counties Wikipedia page has actually turned up.

As you're going to see below, Lancashire was 'the other half' of the Wars of the Roses- Yorkshire being the white rose, Lancashire is red. But if there is one interesting thing I didn't know, it was probably how much of an impact the county's football teams had on the formation of the Football League in 1888. Of the 12 original teams, six were from Lancashire: Accrington, Blackburn Rovers, Bolton Wanderers, Burnley, Everton and Preston North End. As of this season, Lancashire has seven full time teams scattered across the football pyramid: Burnley in the Premier League, Blackburn Rovers and Preston North End in the Championship, Accrington Stanley, Blackpool and Fleetwood Town in League One and Morecombe all the way down in League Two. 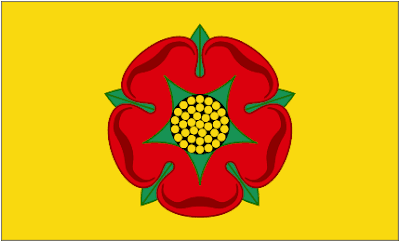 So, the rose as we've already mentioned is a symbol for the House of Lancaster and is immortalized with that verse, 'in the battle for England's head, York was white, Lancaster red' and dates back to the Wars of the Roses in the 15th Century. If there's an interesting twist here, it's that an unofficial flag of the red rose on a white field was never registered-- when someone went to the Flag Institute to try and register to it and make it official, they were denied, because the town of Montrose up in Angus had registered it several hundred years prior. The Flag Institute won't register two flags of the same design within the United Kingdom, so in 2008, the red rose of Lancaster debuted on a gold field, as red and gold are the livery colors of the county.

Next up, Cumbria! Where the heck is it? Well, across the bay from Morecombe, you'll find Barrow-In-Furness. If you follow the coast all the way up to the Scottish border and throw in the Lake District (on the bucket list) and a chunk of Yorkshire Dales National Park and the North Pennines and you have a nice chunk of northwest England that's Cumbria. It's a beautiful place with the Lake District and it's got it's own dialect going on- and Beatrix Potter called it home. Plus, for a motto: Ad Montes Oculos Levavi "I have lifted up mine eyes until the hills"- I think that's kind of a beautiful motto, actually.

The flag situation is where things get tricky. There's not- at least that I can find-an official flag for Cumbria as a county. There's a flag of Cumberland- which was absorbed into Cumbria after the local government reorganization in 1974 and there's a flag of the Cumbria County Council- so given the lack of one flag for the whole county, I figured why not look at both? So, Cumberland: 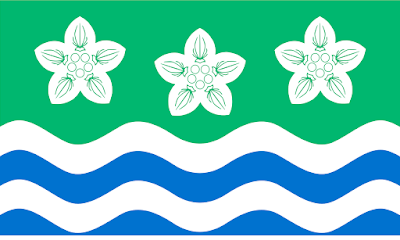 Granted to the historic county of Cumberland in 2012, it's based off the pattern of the arms of the Cumberland County Council which were granted by the College of Arms all the way back in 1950. The flowers are Parnassus flowers, which grow in the marshy uplands of the county, seen growing here on a green field. The blue and white wavy stripes are for the lakes of the county and the coastline of the county. 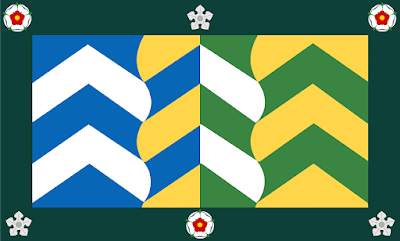 This one is slightly more complicated, but I think does a good job of combining all the portions of the historic counties that were folded into the new county of Cumbria. On the border, we see the Parnassus flowers from the flag of Cumberland interspersed between the white roses of Yorkshire and red roses of Lancashire. The segments of blue-white-yellow-green divided by wavy vertical and zig-zag horizontal lines also does a nice job or illustrating the merger that created the new county, I think. From left to right-- the blue and white are for the sea (the 'leftmost' part of Cumbria), then the blue and gold are for the lakes and agriculture, green and white are for the mountains and lakes and yellow and green are for the mountains and agriculture.

It's a little busy, I think- and certainly not as clean and simple as Cumberland's flag, but I love the symbolism of the Cumbria Council Flag and I think both of them overall do a nice job of representing the county of Cumbria.