This Week In Vexillology #287

April 20, 2019
Our tour of the counties of England keeps on moving this week with England's smallest county: Rutland and the home county of Liverpool, Merseyside! Let's get to it!

Rutland is actually a pretty fascinating county- at it's greatest length, it's only 18 miles north to south and 17 miles east to west- and it's Latin motto leans into it's size: Multum in Parvo, 'much in little.' As an entity it dates back to Domesday Book-- the northwestern part, specifically, while the southeastern part is described as 'the wapentake of Wicelsea.' and it was first mentioned as a separate county in 1159 and called the 'Soke of Rutland' as late as the 14th Century. Rutland was it's own county all the way up to 1974, when it was integrated into Leicestershire. After another structural review of local government in England which was conducted in 1994, it made a triumphant return as a unitary authority in 1997.

Where is it? Well, if you head more or less direct north from London, you'll find it halfway between Leicester and Peterborough. Let's talk about their flag: 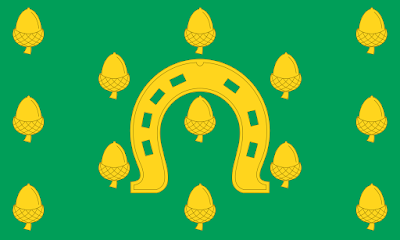 Registered with the Flag Institute in 2015, the banner of arms was originally granted to the county council in 1950 and returned in 1997 when the county made it's return as a unitary authority. The horseshoe has been a symbol of the town of Oakham, which is in the county, since William the Conquerer- when he gave a 125 square mile estate to Henry de Ferrers, whose name suggests a connection with iron-working or farriers. He had the privileges was the claim a horseshoe from any one notable who visited his estates and the a collection of horseshoes still hangs in Oakham Castle. The acorns represent the former forest that used to cover the county. It can also be interpreted as the being 'small and importance' and the oaks suggest a connection with Oakham. The green field stands for the county's agriculture and pastureland.

Next up, Merseyside. Where is it? Well, it's actually pretty easy to find-- Liverpool, home of The Beatles, right on the west coast of England, just around the corner from the northeast corner of Wales. It encompasses both sides of the River Mersey and comes up around the coast to include the towns of Formby and Southport.

It's flag is actually one of the most striking flags I think I've seen so far. 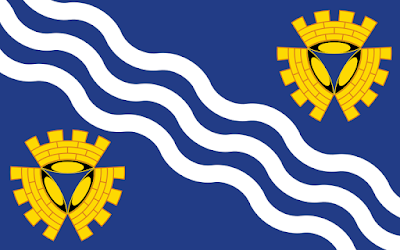 So, that's Merseyside and Rutland! Remember, until next time keep your flags flying- FREAK or otherwise!