This Week In Vexillology #286

April 13, 2019
Our tour of the counties of England is moving right along, because This Week In Vexillology, we've got the flags of Cheshire and Bedfordshire!

First up, Cheshire! We start with our usual question: where the heck is it? Well, find Liverpool, head south across the River Mersey and eventually you'll hit the city of Chester and find yourself smack dab in the middle of Cheshire. (For some reason, Google Maps doesn't want to give me a nice set of boundaries when I search for Cheshire, so unfortunately, no helpful link to the Googles.)

What's the deal with Cheshire? Well, it's a very agricultural county- hence, Cheshire cheese. But Harry Styles, Ian Curtis, John Mayall, Paula Radcliffe and George Mallory all hail from the county. So, let's take a peek at their flag: 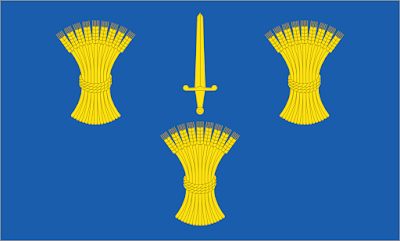 Registered with the Flag Institute in 2013, it's based off a banner of arms of the former Cheshire County Council which was granted in May of 1938. (There was a big governmental reorganization of all the counties in 1974, which explains why there was such a burst of new flags in the early 2000s-- there were plenty of historic banners of arms out there, but none actually representing the new counties themselves- not that there were many new counties per say, just the boundaries shifted from old historic counties slightly.)

Anyway, the three sheaves of wheat and a golden blade on a blue background is considerably older than 1938. It's been associated with the Earldom of Chester since at least the 12th Century and has been officially used in the coat of arms since 1560. This is one of those flags that you almost wish had more of an explanation to it, but alas, it doesn't.

Next up, Bedfordshire! Anyone who has flown out of London for a cheap flight to obscure destinations in Europe might well know at least part of Bedfordshire thanks to Luton Airport which, along with the city of Luton is tucked away at the southern end of the county. What else do we know about Bedfordshire? Well, a lot of notable British companies, including Vauxhall Motors and Easy Jet- but I think it's probably the Bedfordshire clanger that we should celebrate the most, because it honestly sounds kind of good. 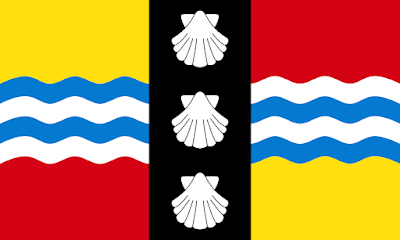 Okay, I really like this flag. It's unique, colorful and I like the shells! It's another one based on the banner of arms of the former county council that was granted by the College of Arms in 1951. The current design was adopted in September 2014 as the flag of the historic county with the support of the High Sheriff of the county. When you fly the flag, the top corner nearest the flagpole should be gold.

There's actually a lot to break down with this flag.. The yellow and red quadrants are taken from the arms of the Beauchamp Family, who were powerful in the county after the Norman conquest and build Bedford Castle. The blue and wavy white lines are for the Great Ouse River, which flows through the county- including the main county town of Bedford. The three shells on the field of black are taken from the coat of arms of the Dukes of Bedford.

And that's the flags of Bedfordshire and Cheshire! Until next time, keep your flags flying- FREAK or otherwise!