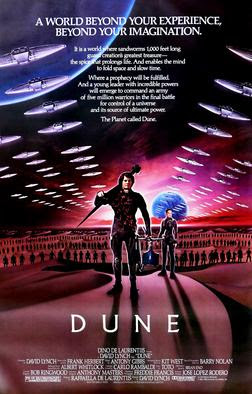 Dune is one of those movies that always seems to be on the SyFy Channel, TNT or [Insert Cable Channel Here] late at night that I don't think I've ever sat through and watched from beginning to end all the way through. I've seen large chunks of it- enough that I might as well have seen it from beginning to end- but never all at the same time. So when it popped up on Amazon Prime and, being stuck at work on a gloriously sunny 4/20, I figured what better way to celebrate the unofficial holiday than by watching Dune? The spice, after all, must flow.

In the far distant future, the known universe is ruled by the Padishah Emperor Shaddam IV (Jose Ferrer). His empire relies on the melange known as 'spice' which extends life and expands consciousness. Most importantly, however, it assists the Spacing Guild with folding space which allows for safe and instantaneous interstellar travel. At the start of the movie, they arrive to demand an explanation from the Emperor about a threat they have sensed to the spice trade. For his part, the Emperor reveals his secret plan to destroy House Atreides, which has grown in power throughout the Empire and has ousted House Harkonnen from control of the planet Arrakis, which produces the spice. Duke Leto (Jurgen Prochnow), his son Paul (Kyle MacLachlan) and Lady Jessica, Paul's mother (Francesca Annis) arrive on the planet to take control. What they don't know is that the Emperor intends to have them ambushed and killed- the Spacing Guild is especially insistent that Paul be killed, fearing that he is the greatest threat of all.

The Emperor's plan is initiated with the help of a traitor within House Atreides and while Duke Leto and the traitor are left to due at the hands of the Harkonnens, Paul and Jessica flee into the deep desert where they are rescued and taken in by the Fremen warriors, native to Arrakis. Jessica becomes their Reverend Mother and Paul falls in love with Chani, a Fremen warrior he had seen in his visions (Sean Young). He takes on the name Muad'Dib and soon the Fremen realize that he is the leader that they have been waiting for. He trains the Fremen and teaches them to use weirding modules and begins an insurgency against the spice production on Arrakis. It takes two years, but Paul and Fremen effectively halt spice production on the planet. The Spacing Guild returns to the Emperor to demand an explanation for this halt and he promises to go and restore order himself. The Spacing Guild tells the Emperor that Paul might drink The Water of Life, which is a poison used by the Bene Geserit to induce their psychic abilities-- if he does so, they fear that he may be revealed as the Super Being the Kwisatz Haderach.

As the Emperor prepares to wipe out all life on Arrakis and ousts the Harkonnens from control of the planet, Paul and the Fremen launch their final offensive. He drinks the water of life, which gives him powerful psychic abilities and the ability to control the sandworms of Dune. The Fremen defeat the Emperor's forces and Paul kills the last of the Harkonnens and assumes control of the known universe, confirming his status as the Kwisatz Haderach by fulfilling the Fremen prophecy of making it rain on Arrakis,

Well, I don't know where to really begin with this. I've heard that the new version coming out in 2020 is going to be in two parts, which I think is the correct decision. If the 1984 version of the movie suffers from anything, it's probably ambition. Dune is a big, dense book and there's a ton and a half of world building and culture development and scene setting you need to establish before you really get to the meat and potatoes of the story. I think that's probably why it took me a couple of tries to really get into the book and finish the story. It's a big, epic classic of science fiction- so it's hardly surprising that this movie tries to be faithful to the book and almost succeeds- but doesn't quite make it.

The time probably doesn't help it hold up well either- which is why the prospect of a new version in 2020 should get you very excited. Special effects technology has advanced considerably since 1984- and what probably looked pretty good three decades ago looks clunky and somewhat cheesy by today's standards. One similarity between the 1984 version and the upcoming 2020 version is that the cast that was assembled in 1984 and the one that seems to be coming together for 2020 are fantastic. All kinds of people show up in Dune- Patrick Stewart, a very young Virginia Madsen, Sting, Brad Dourif, Max VonSydow. They really took a swing at doing this and doing this right. They had all the ability, the cast and everything you could want to really do the source material right- it just that their ambition falls a little bit short.

Overall: Classic science fiction of the 1980s, Dune is a seriously credible attempt to adapt a classic of the genre that falls just sort of it's ambitions. The cast is great, the story works. The effects are a little dated- but it just doesn't quite work. And sort of ends up muddled in parts as a result. Still, My Grade: ** 1/2 out of ****