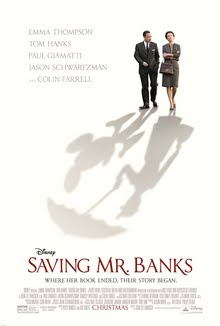 Netflix seems to have upped it's movie game lately, because Saving Mr. Banks sort of popped up last week when I was down with some kind of a stomach bug and I figured, what else was I going to do in between rounds of various stomach related ailments? Saving Mr. Banks seemed like the perfect sick day movie and that turned out to be absolutely correct, because with a cast this charming, it's hard to find complaints about this movie.

The film opens in 1961, with the financially strapped author of Mary Poppins, P.L. Travers (Emma Thompson) confronting the ugly truth: her book royalties have dried up and it looks like finally, she might have to surrender to the inevitable and let Walt Disney (Tom Hanks) adapt Mary Poppins for the big screen. Disney has apparently been after her for the rights for nearly twenty years, having made a promise to his daughters to get Mary Poppins on the big screen. Her agent, Diarmuid Russell (Ronan Vibert) points out that Disney has made two unprecedented concessions: no animations and script approval. So reluctant still, Travers gets on a plane and heads to Los Angeles.

As Travers arrives in Los Angeles and disapproves of the artificiality of the city and how friendly people insist on being, her childhood back in Australia is revealed. Her father, Travers Goff was her idol, but suffered from chronic alcoholism which lead to his repeated firings which caused strain in her parents marriage and nearly drove her mother to suicide. His death at an early age from tuberculosis leads her Aunt to arrive- she's firm, but practical and serves as the main inspiration for the character of Mary Poppins.

Her working relationship with the Disney team is strained from the outset. Travers views Mary Poppins as the element of sentiment and whimsy, which puzzles the Disney team given the imaginative nature of the book. She hates the portrayal of George Banks, arguing that he is not cold or cruel and gradually, the team realizes how personal a lot of the characters are to her.

Disney, trying to understand what troubles her takes her to Disneyland, which, along with her developing friendship with her driver, Ralph (Paul Giamatti) breaks down her opposition- especially when they come up with a new song for the ending. However, just as everything seems to be proceeding well, an animation sequence is revealed and furious, she confronts Disney over his broken promise and returns home.

Disney then learns that P.L. Travers is actually her pen name and having realized that Mr. Banks is actually based off of her own father, flies to London to tell her that he too had a less than ideal childhood and that he doesn't let the pain of the past dictate the present and neither should she. He promises her that he will take excellent care of Mary Poppins- and will make sure that George Banks is saved and redeemed- which finally gets her to relent and grant Disney the film rights.

Three years later, Mary Poppins is set to have it's world premiere in Hollywood and Disney has not invited Travers, fearing how she might react with the press watching. But she shows up unannounced and asks for an invitation anyway, which Disney grants. She still disapproves of the animated sequences, but warms up to the rest of the film and is in tears by the end as she watches George Banks be saved and ultimately redeemed.

Overall: A nice piece of of behind-the-scenes history of the House of Mouse, Saving Mr. Banks actually tells a sweet and sentimental story that is perfectly on brand for Disney today. It's not a particularly complicated film, but it does what it sets out to do: tell the true story behind Mary Poppins and it's long road to the silver screen and demonstrate the power of art and film to heal and make a difference in people's lives. In short, it's the perfect movie to spend a lazy afternoon with. My Grade: *** out of ****