This Week In Vexillology #285

April 06, 2019
We're back in the saddle again and heading back across the pond to continue our (now rather long-running) tour of the counties of England .I sat down with a printed map of the counties of England, a sharpie and a list of all the counties we've looked at so far and narrowed down the list of what's left. I figured we've got maybe a month, month and a half left of our grand tour- but today, we're going to keep on moving with Buckinghamshire and Hertfordshire.

Let's start with Buckinghamshire. Where is it, exactly? Well more or less northwest of London. If you find Oxford and Milton Keynes on the map, you'll find the town of Aylesbury and that's more or less the center of Buckinghamshire. The boundaries of the county  narrow the closer it gets to London, running along the M-25 and the Colne Valley Regional Park before arching around the town of Slough and heading back up into the Chiltern Hills again. Seems like a lot of famous folks live in Buckinghamshire- so I imagine both it's natural beauty and proximity to London are probably quite a draw. 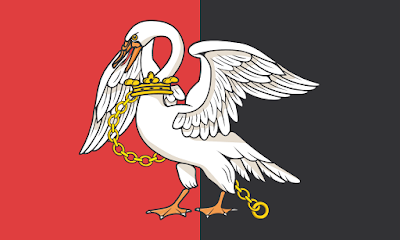 Adopted on May 20th, 2011, it's listed as a 'traditional' flag and sadly, there's not much more to it that Buckinghamshire is where they bred swans for the King dating back all the way to Anglo-Saxon times. But, let's step back and consider a few things, shall we?

That is one pissed off fucking swan. I mean, look at the damn thing. It's chained, there's a crown around it's neck, it's either going to straight up kill a human being or breed the hell out of some poor unsuspecting female swan. (BTW: I've been to a swannery and have long since determined that swans are the raging, festering assholes of the bird world.)

Either way: props to Buckinghamshire for having the most metal flag of any county in England.

Next up, Hertfordshire. Where is it? Well, it's still northwest of London, but it's more north-northwest than true northwest- if that makes sense. St. Albans, Watford, Stevnage, Hemel Hempsted all form the major towns of the county. If it's known for anything, it's for movies- Harry Potter, Star Wars IV, V and VI and GoldenEye were all filmed in the county. 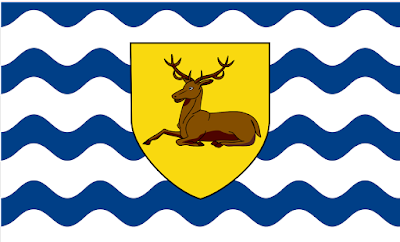 Designed by the College of Arts and adopted in November of 2008 the flag of Hertfordshire is a traditional heraldic design. The blue and white wavy lines represent the many rivers of the county, while the yellow shield and reclining hart are taken from the arms of Hertford. It's also a pun! A hart, lying on a ford, so Hertford! The yellow field that the hart reclines on stands for Saint Alban, who is the patron saint of the county.

So we've got a raging, metal as hell swan and a nice, reclining very chill deer- both of these flags are striking and unique- so, there you have it- Hertfordshire and Buckinghamshire!