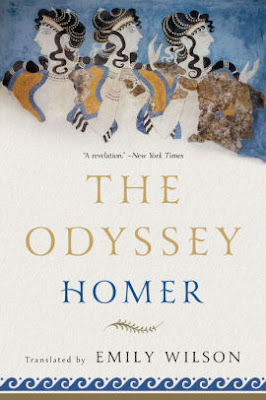 It's surprisingly difficult to figure out how to review a work that you've read in various forms multiple times over the years, but that, I suppose, is probably par for the course when it comes to translations of the ancient works of Homer. I have a very good prose translation of The Odyssey kicking around somewhere on my bookshelf, but I began to hear a lot of good things about a new poetic translation of the work by Emily Wilson the fact that she is the first woman to ever translate it made me sort of curious about it. I threw it on the old Amazon Wishlist for Christmas, Santa delivered and I dug in.

Kids, I was wrong.

This translation has to be the best translation of The Odyssey I think I've ever read- and it grabs you from the very first line: "Tell me about a complicated man." If there's a 'First Line Hall of Fame' for literature out there, this one would have a pretty decent shot at getting in. Six words that perfectly distill the character of Odysseus as well as the story you're about to read. After that, you're off and running- Wilson's choice of using iambic pentameter is somewhat inspired, because I think it's a meter that most people who have English as a primary language will find to be the most accessible, if for no other reason that everyone had a little bit of Shakespeare in high school.

But it's her language that really kicks it up a notch. It's clean, sparse and simple-- all of which you'd think would be kind of an obvious thing to aim for, but I expect (but don't know, having not done a comprehensive examination of translations of The Odyssey) that isn't necessarily the case. I imagine that there's a temptation to stay as close to the original meaning as possible, which might make for a translation that's closer to the original poem and thus more 'authentic' but it means the language might not be as accessible to readers as you'd like. Wilson's use of language makes her translation extremely accessible to readers. It's modern, clear language and brings out the story perfectly.

Speaking of the story: the familiar hits are all here. The Lotus Eaters, The Sirens, Scylla and Charybdis, The Cyclops, Aeolius and the Bag of the Winds, Circe, the Sun God's cattle and finally Calypso's island, where Odysseus finds himself at the start of the story. Two things that I didn't realize- or at the very least had sort of forgotten: first, how relatively small a part Odysseus' journey actually plays in the story itself. As readers, we don't follow him home and see the journey, but rather hear him tell the story when he's in the court of the Phaeacians. Second was the parallel journey of Telemachus in all of this. Wilson's translation brings Telemachus to life and moves him to the front of the story in a way that a lot of translations that I've read don't. He goes off to Sparta and Pylos, inspired by Athena to take a parallel journey of his own to find some news, any news of his father.

The Suitors, too, become more well rounded characters. They're still sort of the collective mass of 'bad guys', but their impatience and greed and desire for the wealth of Odysseus' household becomes far more pronounced. You can understand the motivation for the rage of Odysseus when he finally returns home. These guys have been wrecking his house, eating his food and disrespecting his wife for years now. Their inevitable bloody end is well earned (and graphically depicted.)

One of the blurbs on the back of the book says, "In the history of Odyssey translations, few have exerted such a cultural influence that they become 'classics' in their own right... I predict that Emily Wilson will win a place in this roll-call of the most significant translations of the poem in history. She certainly deserves the honour." I feel like this more or less hits the nail on the head...  this translation is a revelation that breathes new life into an ancient poem and propels it into the 21st Century with beautiful, clear language that brings the musicality of the original poem out into the light in a way that you didn't realize was possible.