This Week In Vexillology #249 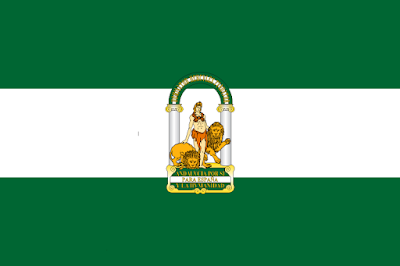 This is the civil and state flag of the region and it was adopted in 1918. The assembly that adopted the flag also adopted a charter based on the Antequera Constitution that wanted Andalusia to be an autonomous republic inside a federal Spain. (Not unlike what the Catalans had going for them right up until their declaration of independence- however that's going.) What's the 4-1-1 on what the flag is all about? Well:

On the flag, you've got the Coat of Arms of Andalusia. So let's go ahead and talk about those as well... 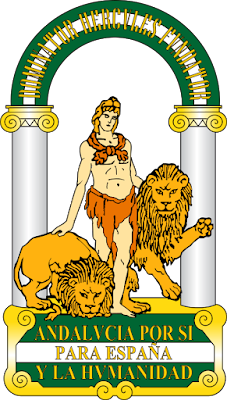 Okay: again, there is a design critique to be made that the 'Coat of Arms On A Flag' is the equivalent to the American sin of 'Seal On A Bedsheet' but these Coat of Arms are unusual enough that I sort of gave them a pretty close look. The more traditional elements of a Coat of Arms are absent. There's no shield, there's no historical ties to the region or anything like that. What you do have, though, are lots of nods to the region itself.

The two pillars are, of course, the Pillars of Hercules on either side of the Straits of Gibraltar. The dude in the middle? It's none other than the man himself, Hercules seizing and taming two lions, each representing the power of animal instinct. Below the Lions, you've got the legend, 'Andalucia Por Si, Para Espana Y La Humanidad' and above the Latin inscription 'Dominator Hercules Fundator'. (Which is super hard to read, I know, but is actually what is written up there.) Rough translations of both mottos- the Spanish: 'Andalucia for itself, for Spain and for humanity.' and the Latin: well, Google Translate came up with: 'Her dominator founder.' Go home Google Translate, y'all must be drunk.

Overall: 'meh' flag, but really interesting Coat of Arms. There's something retro about them that makes me think 70s and they might be too 70s, really. (The city flag of Madrid provides a good example of what a contemporary update to your Coat of Arms might look like). But a lot of the inspiration for them came from the city arms of Cadiz and I think this is a fairly faithful adaptation of those for the wider region.

So, that's Andalusia. Remember, until next time keep your flags flying- FREAK or otherwise!