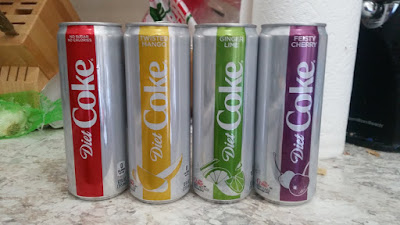 Food marketing is the worst. I say that because whenever some company somewhere comes out with NEW FLAVORS and TASTE THE DIFFERENCE, there's a little part of my brain that always goes, "Ooooh, I'll have to remember to try that." Doritos (damn them!) are a prime example of this. Mountain Dew and it's ever increasing colorful kaleidoscope of flavors is another. And while technically I'm supposed to be on the soda wagon right now, I had to jump off to try the weird new flavors of Diet Coke.

Diet Coke, until I discovered the hipster joys of LaCroix was my jam a few years back. Even though for the vast majority of my life, I never really drank soda and when I did, it was the regular stuff and I thought Diet stuff tasted weird, at some point I went all in on the Diet soda, probably in a misguided belief that it was somehow healthier for me, but really because I was in college and a healthy dollop of rum took away the weird Diet taste. At a certain point, I realized that I had gone too far and I couldn't go back as regular soda tasted horrendously sweet to me (and still does) but I'll always have a soft spot for Diet Coke and Diet Dew.

So, naturally, when The Weird New Flavors of Diet Coke were launched in an obvious attempt to appeal to the youthful hipsters of America, I decided to run down all down so the Missus and I could try them and come up with the Definitive, 100% Accurate Ranking. This is what we got:

1. Feisty Cherry: Cherry is not a weird flavor for Diet Coke, so really it's not that big of a jump to get behind this one. It might, maybe, have more of a 'black cherry' taste to it, but to me it just tasted like a Diet Cherry Coke.

2. Ginger Lime: Probably the most subtle of the new flavors, again this wasn't that hard to get behind. You can taste the lime, but the ginger sort of gets lost in a sea of coke flavors, but nothing particularly wrong with it. I don't think I'm going to rush out and buy it by the case load, but I also wouldn't pour it down my sink either.

4. Zesty Blood Orange: there's nothing zesty about this flavor, in fact, the orange was a massive misfire as it overwhelms the Diet Coke and you end up drinking a Diet Coke flavored Blood Orange Soda which is about as disturbing as one might imagine.

Honorable Mention: Regular Diet Coke. If you have no idea why anyone would want to ingest any flavor of Diet Coke, keep right on drinking the regular stuff. It's really hard to go wrong with Plain Old Diet Coke.

Overall: none of these flavors is enough to lure me back into soda full time. Some of them taste better than others do, but none of them made me go, "I need to buy a case of this as soon as possible" which is probably not the reaction that Coca-Cola was hoping for. (Semi-Serious question though: whatever happened to Vanilla Coke? Now that was delicious.)