This Week In Vexillology #248

February 17, 2018
We're heading across the border, This Week In Vexillology to celebrate Yukon Heritage Day by taking a peek at the flag of the Yukon Territory: 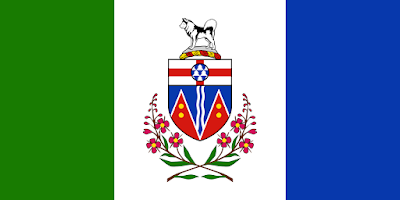 Adopted on March 1st, 1968, the flag of the Yukon was chosen following a territory-wide competition to celebrate Canada's centennial of 1967. Out of 137 designs, Yukon College graduate Lynn Lambert was the lucky winner. A prototype was sent to Ottawa to get all heralded up and stuff and they sent back an amended version, but they stuck to their guns and kept the original winning design.

The flag itself is a tricolor defaced with the Coat of Arms of the Yukon. ('Defaced' is a technical design term and not meant to be derisive.) The three colors of the tricolor part of the flag are pretty easy to break down: the green represents Yukon's forests, white stands for snow and blue stands for the lakes and rivers of the territory. The coat of arms is placed in the center above a wreath of fireweed, the flower of the Yukon. Let's break down the Coat of Arms a little bit more: 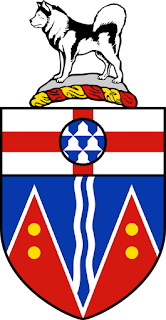 If you were curious, yes that is an Alaskan malamute standing on what's supposed to be a mound of snow. Below that in the 'chief' or upper part of the shield, you have a red cross representing England a disc surmounting it in in a pattern called 'vair' which is the heraldic equivalent of fur for all the fur-bearing animals in the Territory. Below that, the lower section of the shield represents the mountains of the Yurkon- the gold disks stand for the mineral wealth of the territory and the two wavy lines stand for the rivers of the territory.

(I've seen some criticism of 'coats of arms' on flags here and there, but I'm not a design snob and while this flag may well be the Canadian equivalent of a 'seal on a bedsheet' I'm actually down with this flag. I dig the colors. I dig the Coat of Arms- I mean, how can you not love a Coat of Arms featuring a Malamute? I mean, for serious now.)

And that's the flag of the Yukon! Remember, until next time keep your flags flying- FREAK or otherwise!