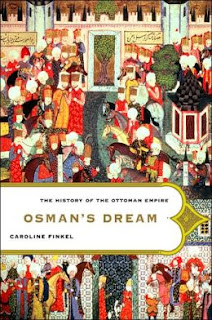 My parents used to have (and I hope they still have) a Times Atlas of European History which I would read and look at almost religiously when I was kid and one of the forgotten states/empires that always fascinated me was the Ottoman Empire. It was crazy to think that Rome in one form or another persisted until 1453, when it was snuffed out by a rising Ottoman Empire- and the rise of the Ottomans was equally fascinating to watch unfold on the pages of the atlas. What would have happened had they taken Vienna in 1683? (I'm not sure, but it's one of great 'what if' questions of history.) Learning more about the Ottomans was one of my personal historical itches* that I had been wanting to scratch for quite some time and happily, Caroline Finkel stepped in to help out with an excellent one volume tome of Ottoman history, Osman's Dream.

'Tome' is probably the most accurate description of this book. The narrative runs to 554 pages with at least a couple of hundred more of footnotes and various appendices. Despite that, it sort of fell between, 'I can't put this down' and 'Dear God, let this book end sometime soon' on the spectrum for me. I could read about half a chapter at a time and given that the chapters were about 40-50 pages or even longer sometimes that, I thought was a fairly decent chunk of book to read at a time. Finkel is comprehensive and you can tell that she has researched the topic of the book exhaustively, but her style isn't as narrative-driven as say, Antonia Fraser, but it's not as detail oriented and 'full immersing you in the topic whether you like it or not' like Roy Jenkins and his biographies. Part of that, I suspect is down to the nature of the topic. When you're trying to fit six hundred years of history into one book, you don't really have time to faff around with your writing style or get lost in the minutia. But I've also read 'big topic' books like this that are eye gougingly boring to read and Finkel, happily avoids that fate.

The story itself, is a fascinating one. The founding myth of the Ottoman Empire (namely that it's founder, Osman, had a dream about conquering a great empire) opens the book and Mustafa Kemal and his grand speech marking the foundation of the Turkish Republic by making a founding myth of his own, closes it, so there's a nice symmetry there that you can appreciate. But it's tracing the rise of the Empire that's fascinating... Osman was from a fairly minor tribe in central Anatolia and with the Byzantine Empire in it's (seemingly) usual state of chaos, someone was primed to take advantage and start consolidating the Turkish polities of Anatolia and he did just that.

The arc of the next several centuries is punctuated by three main events: taking Constantinople in 1453, the siege of Vienna in 1683 and the Tanzimat reforms of the middle 19th Century. Constantinople made the Ottomans into a continent spanning empire and a world power that made the Christian powers of Europe tremble. The siege of Vienna was their high water mark and really and truly it was all downhill from there. The Tanzimat reform period is interesting because it was at least a recognition by the Ottomans that they needed to come to grips with the explosive forces of nationalism that lead to things like the independence of Greece and then Serbia and Romania. What's interesting to think about, reading it, is thinking about the possibilities if the Ottomans had embraced the reform movement even a century earlier. They were a multi-ethnic, multi-religious empire and maybe that was a kettle of chips that was going to be hard to hold together in the best of circumstances, but the tragedy of Tanzimat is that it was way too little, too late for the Empire. One throw of the dice and a couple of decent Sultans even a century earlier could have potentially changed the direction of the Empire.

While the rise and fall take centuries, reading about how it all imploded is equally fascinating as part of Mustafa Kemal's vision for Turkey involved sweeping away the diversity of the empire that preceded it. Finkel actually tackles the question of the Armenian Genocide in as neutral a way as possible- acknowledging that it happened while presents the pro and con cases for calling it a 'genocide' without falling into the traps of editorializing or passing judgement on the issue, which I find oddly refreshing, given today's current climate on controversial issues of history.

Overall: A bit of a hard hike to get through it, but packed with knowledge and really and truly an excellent one volume history of an empire that spanned six centuries. Must read if you're interested in that part of the world or just want to find out about the Empire that gave your footrest its proper name. **** out of *****

*I have A Short History of Byzantium somewhere on the bookshelf, which was a fantastic read, so I figured I might as well just keep going and find out about the Ottomans as well. Either way, worked out well for me as I got my knowledge on!