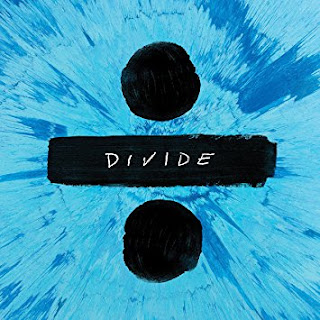 The Missus is all about Ed Sheeran and therefore, I've learned to get used to listening to the old ginger crooner, so when I was scrambling around, trying to find an album to review for this month, it hit me: why not take Ed Sheeran's latest album Divide out for awhirl and really see what it was really like- and no real surprise it was a pretty good listen- if you're super into dreamy dudes with a guitar this will be 100% in your wheelhouse.

The thing that stands out about this album is that there is a mix of sounds throughout this album. It's not all soft love songs and acoustic guitar, which I think makes it a strong album, because there is a little bit of everything for everyone. The tracks that stood out for me- in no particular order: 'Nancy Mulligan' an Irish tinged up tempo ballad telling the romantic story about how his grandparents met and got married. 'Bibia Be Ye Ye' is an a bouncy, African-tinged (specifically: Ghana) track that just makes you want to dance. 'Barcelona' is another up-tempo track that makes you want to dance- though this time the flavor is Spanish. 'Galway Girl' gets a lot of grief out on the interwebs, because well, how are you going to top Steve Earle? But it's still a good song! 'Shape of You' is probably the track with the most radio play (and weirdly, it got him into a wee bit of trouble with TLC of all people.)

'Castle On The Hill' is probably my favorite track, simply because it gets me all nostalgic for my youth and reminds me of how utterly old I'm becoming. It's also a good track.

So all the up-tempo tracks are really really good. The slower ones: 'Supermarket Flowers' is a tribute to Sheeran's late grandmother who died while he was making the album- it's absolutely beautiful and if you don't shed at least one tear thinking about your own grandmother who's already left you then you have no soul. 'Perfect' is just a beautiful love song that he wrote for his fiancee. 'Happier' is a sort of love lost/love unrequited/the one that got away ballad that Adele and T-Swift dabble in, but Sheeran does a perfectly excellent job with. 'Hearts Don't Break Around Here' is another one that stands out- mainly I think for the refrain, which seems to stick in the head a bit. 'How Would You Feel' rounds out the best of the slower tracks.

The one questionable choice, weirdly enough is the opening track, 'Eraser.'  All credit to Ed for attempting a pretty decent wrap, but at the end of the song, he's still a ginger trying to rap. Not awful, but it stands out as a weaker track on an album full of solid to excellent work.

I'm not really a 'dreamy dude with guitar' kind of guy usually, but I'll make an exception for this album. My personal barometer for any given album tends to be how many tracks I like on any given album divided by the total number of tracks on an album, which means that Divide scores an 12/15 (I'll throw in 'Eraser' just for kicks) on my personal scale of awesomeness.

Overall: This is a really good album...  I would 100% buy it again and enjoyed listening to it. (Hopefully, the Missus and I can cross off an item on her bucket list and get to see Ed Sheeran later in the year somewhere!) My Grade: **** out of ****