This Week In Vexillology #247

February 10, 2018
We're dipping back into the 'Lost Archives' this weekend and heading back to Central Europe to take a look at the flag of Hungary: 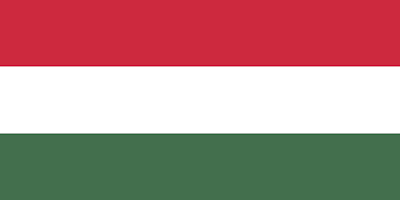 True story: we had goulash last night for dinner (American-style goulash and not the more traditional Hungarian version) AND I'm still listening to Mike Duncan's excellent Revolutions Podcast which is currently tackling the revolutionary year of 1848 that convulsed so many countries in Central Europe. Plus, I think paprika is probably one of my favorite spices. So I'm all about Hungary.

The exact form of the flag has been official since May 23rd, 1957, but the tricolor has been around since the Republican movements int he 18th and 19th centuries and the colors have been associated with Hungary for even longer than that- dating all the way back to the Middle Ages. (More specifically, the colors were taken from the Hungarian Coat of Arms that's been in the same form since the 15th Century, but they also were showing us as early as the 12th and 13th Century in the arms of the Arpads, the founding dynasty of Hungary.)

The evolution of the flag is somewhat interesting to read about- they went horizontal instead of vertical to avoid confusion with the flag of Italy, but they also kept the tricolor as a nod to France and their revolution. (Theoretically you could have pulled a Mexico if you really really wanted to keep the vertical tricolor and thrown the arms in there as well to differentiate it from Italy, but I think Italy has variant flags that include their arms as well, so maybe that wouldn't have been as helpful.) In general, the tricolor + coat of arms combination has been pretty constant since 1848- there are some exceptions though. There was a Hungarian Soviet Republic that was around for like a minute in 1919 that used a solid red banner- but even post-WWII Communist Hungary went with tricolor + coat of arms, leading to this: 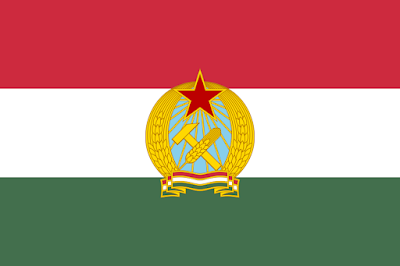 And then this, following the failed Hungarian Uprising of 1956: 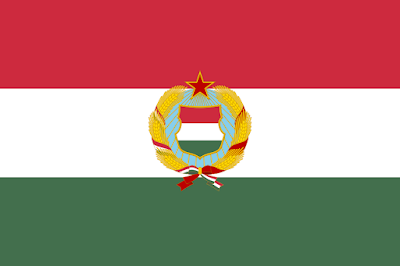 It's interesting, having listened to a whole bunch of episodes on 1848 and their Revolution to see how strongly Hungary's national identity shines through in the evolution of their flag. The Communists didn't have the balls to ditch the tricolor post-WWII and post-1956 they toned down the hammers, sickles and the big-ass red star and toned up the national tricolor again. It makes me wonder if Hungary's strong sense of national identity was enough to almost trump ideology. A lot of former Communist countries went back to older pre-Communist flags following the fall of the Soviet Union or went in a totally different direction post-independence. I'd have to check to be sure, but it'd be interesting to see if there were any other countries that sort of broke the mold during their communist period.

But what does it all mean? Well, the colors have been attributed to virtues: red for strength, white for fidelity and green for hope- something which was confirmed by the new Constitution in 2012. (But there's also an alternative explanation, which has red standing for the blood spilled for the fatherland*, white for freedom and green for the land/pastures of Hungary.)

And that is pretty much all there is to the flag of Hungary! Remember, until next time, keep your flags flying- FREAK or otherwise!

*Another thing it would be interesting to look into: which countries are 'motherlands' and which are 'fatherlands.'