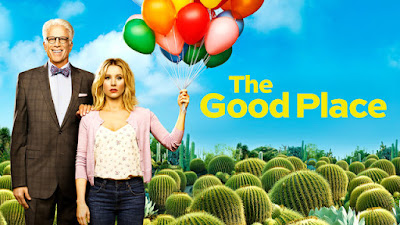 Squawk Box this month tackles two shows that couldn't be more different: the off-beat (yet surprisingly deep and intelligent) sitcom antics of The Good Place and the true crime docudrama Manhunt: Unabomber. I'm not sure what to think of the former and I still can't quite believe that the latter aired on the Discovery Channel and assembled the amazing cast it did.

I don't know what to think of The Good Place. The Missus and I gave the pilot episode awhirl and didn't really know what to think of it (she had just finished Love Sick, an excellent Netflix show if you're in the market for something to watch and then she moved onto Atypical) but I was curious enough to burn through the rest of the twelve episodes to see if I could make up my mind about it and...  I still can't.

I tend to picky about sitcoms. If they're funny enough to make me laugh out loud on a regular basis (like Arrested Development) then I'll pay attention, get invested and actually watch. If they're only mildly amusing, then I'll sort of throw them on as background noise while I do stuff and sort of check in from time to time (like Grace and Frankie). The Good Place sort of falls someplace in between on my personal sitcom spectrum. It opens with Eleanor (Kristen Bell) being told by Michael (Ted Danson) that she's dead and in heaven. She gets to learn the rules of 'The Good Place' as it's called and meets all the other people in 'The Good Place' including her soul mate Chidi (William Jackson Harper) who is an ethic professor from Senegal.

The rules of The Good Place are pretty simple: you accrue points while you're alive by doing good deeds and lose points for unethical decisions. If you're good enough, you go to The Good Place if not, you go to The Bad Place (which seems to be the equivalent of hell) for an eternity of torture and pain. Eleanor gets shown all the 'amenities' including her house which includes clown art, because why not, but then, plot twist! Turns out they've got the wrong Eleanor- this particular Eleanor made a living selling a supplement to the sick and elderly that was worthless and was crass and uncaring- in short, she was not a good person and chaos begins popping up in The Good Place as it reacts to her presence and misbehavior.

You would think that the concept alone would give this show the survival probability of a snowball in hell, but curiously this works. It infused with a sort of shiny ethereal charm that reminds me a lot of Pushing Daisies and then, just when you think it's going for sweet and charming it turns into a surprisingly intelligent and deep discussion of morals, ethics, philosophy and what makes a person really and truly good. This show wasn't at all what I was expecting, but it's refreshing to see a show that brimming with intelligence and exploring some seriously deep shit- especially a sitcom. (There are some twists and turns worth talking about, but I'm won't, because spoilers.)

In contrast to The Good Place, Manhunt: Unabomber isn't exactly a fun, happy time, but it is a fascinating one. The story of the FBI's manhunt for the Unabomber and the tools they used to catch him, Manhunt: Unabomber is a taut, eight episode ride that features an outstanding performance from Paul Bettany as Ted Kaczynski who bounces off Sam Worthington (who plays Special Agent Jim Fitzgerald) perfectly.

The break in the case comes courtesy of Fitzgerald, a newly minted and much heralded profiler who zeroes in on the idea of using linguistic patterns to find the man they're looking for, developing a practice of forensic linguistics as a result. Fitzgerald struggles to adapt to the tight knit Unabomber task force, who prove to be tough to sell on new theories about the case they've been working on for years, but he finds an ally in street agent Tabby Milgrim (Keisha Castle-Hughes) and works to convince his bosses that he's onto something.

The Unabomber has been oddly inactive for awhile, but when his manifesto surfaces with a threat to bomb a plane, authorities at the highest level must wrestle with a decision to publish the manifesto or not. (Chris Noth is excellent as usual as Agent Don Ackerman and Jane Lynch is a solid and surprisingly delightful choice to play then Attorney General Janet Reno.) They ultimately decide to do it and eventually, Ted's writing style is recognized by his brother, David (Mark Duplass) who reports it to the FBI who initially dismisses the link, but Fitzgerald knows better and gets the evidence they need to get their man.

Interwoven between this, they flash forward to just before the start of Kaczynski's trial. Agent Fitzgerald is living high in the mountains, alone and is initially reluctant to help the FBI again- but the Feds are eager to avoid a trial, thinking that Kaczynski will turn it into a media circus and could potentially get off as a result. Fitzgerald is a broken man in many ways. His marriage imploded in the stress of working the case and he is no mood to re-engage with a case that has cost him so much professionally and personally. But he gets back in the ring with Kaczynski one more time and eventually convinces him to enter a guilty plea and finally bringing the Unabomber case to a close and finding some peace in the process.

There seems to be a weird fascinating with the crimes of the 1990s of late in television. American Crime Story tackled OJ and is now moving onto Gianni Versace. The Network formerly known as Spike has a Waco mini series about to start dropping and the Discovery Channel tackled the Unabomber. I only vaguely remember the basics of this case, but the mini series talked about a lot and made me want to learn more about it- so there's that, I guess. It feels a bit like the Discovery Channel sort of snuck this is under the radar a bit, because I remember seeing nothing about it when it was actually airing, but hopefully Netflix gives this series the exposure and the praise that it deserves- because it deserves a lot. Paul Bettany is good in just about everything he's in, but he's really good here and they assemble a capable and talented cast to back him up. Plus: at eight episodes, it's nice and short- and worth watching.

My Verdicts:
The Good Place: sweet, charming and thought provoking enough I'll probably watch more if it shows up on Netflix again. Don't think it quite qualifies as 'appointment television' though.

Manhunt Unabomber: 8 episodes with Sam Worthington and Paul Bettany? Sit down and watch this already.