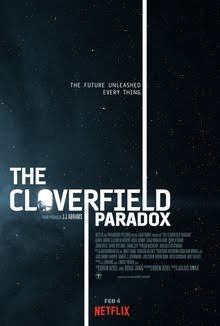 I watched Cloverfield and thought it was pretty good- a nicely contemporary take on a Godzilla like monster that rampaged through New York City. (This predated the new Godzilla by a bit so at the time, all we had to go on was the Matthew Broderick/Jean Reno one with that awful P. Diddy/Led Zeppelin mash-up of Kashmir in the soundtrack.) I didn't bother with 10 Cloverfield Lane. I'm not sure why. I just never really felt an urge to go and see it and it's never caught my eye at a Redbox enough to say, 'hey, let's watch that.' So I'm still not sure why I even bothered with The Cloverfield Paradox- other than it's arrival in the world was sort of a Super Bowl surprise courtesy of Netflix so I was curious to see if it was a surprise worth watching.

Spoiler alert: it's not.

Set ten years in the future when the Earth is suffering from a global energy crisis, the space faring nations of the world have built a particle accelerator in space which they hope to use to provide the planet with infinite energy. Some alarmists fear that it will open portals between dimensions and allow horrors to destroy the planet. Among the crew is Ava Hamilton (Gugu Mbatha-Raw) who was reluctant to leave her husband, Michael a doctor, and is still grieving the loss of her children in a house fire.

Their tests prove unsuccessful for two years until they finally seem to get a stable beam until it overloads and the next thing you know, they're lost, the gyroscope they need to help them navigate is missing and a strange woman is trapped in one of their walls. It doesn't take them long to figure out that the woman, Mina Jensen (Elizabeth Debicki) is a member of their crew- just from an alternate universe. And after that, weird things start happening (as they tend to do on space stations where the lights flicker a lot) and to make a long story short: they figure out where they are and eventually get the particle accelerator to work so they can go home. Naturally there are only two survivors and when they get home?

Well, Ava's husband Michael starts yelling at Mission Control for letting her come back down to Earth because the monster in the original Cloverfield? Well, he's back and brought plenty of friends with him.

I really don't want to spend a lot of time on the plot of this movie, because it was less of a plot and more a collection of every sci-fi/horror movie cliche you can think of...  it wasn't a total trainwreck, because it was...  mildly entertaining? I guess? But you knew pretty early on that there either be one or two survivors and that if they managed to get home it would probably be all messed up, because you know, particle accelerator.

The cast does the best with what they have: Gugu Mbatha-Raw has been excellent in everything I've ever seen her in. Daniel Bruhl, David Oyelowo and Zhang Ziyi also bring their considerable talents to make the movie better. However, the one member of the cast that comes pretty damn close to stealing the show is Chris O'Dowd. The 'comic relief' (who of course, meets an unhappy ending) O'Dowd's approach is pretty subtle in many ways. He's not going for funny, but between his asides and one liners he consistently gets there and proves to be one of the best parts of this movie.

Where are they going with this franchise? I have no idea and there are rumors of another Cloverfield movie lurking in the ether already, but I feel like it might be time to wind this sucker down, because I have no idea where they could possibly take it next. (I've always thought that looking what happens after these sort of monster/disaster movies would be interesting, but who knows. Wait! I know! Plot Twist: Cloverfield 4: Pacific Rim.)

Overall: A bundle of science fiction cliches, The Cloverfield Paradox more than earns its 17% rating from Rotten Tomatoes. Gugu Mbatha-Raw remains excellent in everything I see her in and if there's a reason to watch this movie, it's probably Chris O'Dowd. My Grade: ** out of ****