This Week In Vexillology #212

May 06, 2017
This Week In Vexillology, we're looking at some municipal flags*, just so shake things up a bit: Tampa and Tulsa. Let's start off with Tampa- the flag of Tampa? Well the flag of Tampa looks like this: 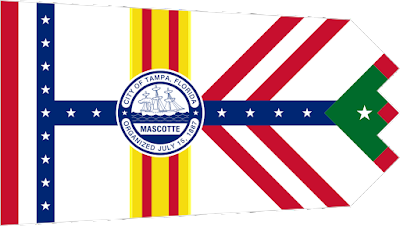 Adopted on July 1st, 1930, it's meant to represent "the eras, growths and characteristics of Tampa." And it's not really a flag- it's more of a strange combination of a bunch of other flags. Yes, there are elements of the Stars and Stripes (should be obvious to the eye), the British Union Flag (I'm assuming the diagonal red lines here?), the flag of Italy (the red and the green at the tip of the flag) and the French Tricolor (red, white and blue). There's also red and gold to represent Spain- who helped to explore the area in 1528. The area also saw an influx of Spanish and Cuban immigrants.

There's an 'H' in the flag that should be obvious to the eye that stands for Hillsborough County, where Tampa is located and the blue stripe/white stars form a 'T' that stands for Tampa.

I'm honestly not sure how to feel about this flag...  it's shape is unusual, which kind of makes it stand out, but it's also a hot mess. It commits the cardinal sin of a placing a 'seal on a bed sheet' when honestly, it'd probably look a lot more interesting without it. It'a got multiple colors- far too many for an effective design and that's further undermined by a white background, which makes this whole flag look like a  collection of random lines with a seal on top of it. In short, I think this flag is trying to do too much. Something simpler would be a lot better and you don't need to cram your entire history into one flag. TL; DR: This may be a hot mess, but it's an interesting hot mess, which is a hell of a lot better than a just plain old regular hot mess.

Tulsa, on the other hand- had a hot mess and is trying to improve it! They've got three potential replacements all lined up and ready to go and voting is underway through May 10th. Check these bad boys out: 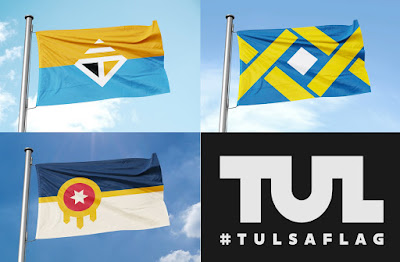 I actually changed my tune on these flags after checking out the explanation video on the website. I was all about the bottom left flag, but I think I'm leaning toward the top left flag instead. The top right flag, while nice and actually kind of striking, is a little too abstract for my taste. Let's look at my choices (taken direct from their awesome website!) Top Left:


The central element re-imagines the current city seal while simultaneously representing an acorn, symbolizing the Council Oak Tree and the founding of the modern city of Tulsa. The center of the design comes together to form a 'T' for Tulsa. The black lower left triangle represents the discovery of oil that brought people and commerce to our city. The gold bottom right triangle typifies the Art Deco architecture in Tulsa that is a product of prosperity and innovation. The top triangle stands for our Native American heritage; the middle bar for Black Wall Street. The blue lower half represents the Arkansas River and the gold upper half symbolizes a new day and a promising future for our city.

This really has grown on me. The design is simple, the central feature/element is back with symbolism and in contrast with say, the flag of Tampa, the low number of colors makes for a clean design with a central element that really stands out. So, what's the 4-1-1 for the Bottom Left:


The dream catcher is a Native American symbol of unity, and here it represents the settlement of Tulsa by the Creek tribe under the Council Oak Tree. Within the shield, the color red honors the lives lost in the Tulsa race riot. The Art Deco style star at the center represents Tulsa's future. It shows that our city heals from past wounds and flourishes as an icon of a uniquely American city. The horizontal line represents the 1901 discovery of oil, the 'black gold' that brought substantial growth and commerce to this land. Finally, the blue field symbolizes the Arkansas River and the many resources it has provided throughout our history and today, while the beige field represents the warmth and community found in Tulsa.

I am honestly torn between these two flags. I like the fact that the dream catcher is slightly off-center in the bottom left flag, but what I didn't know was that the bottom half of the flag was, in fact, beige and not white. Which I think is the deciding factor is me going with the Top Left. The beige in the flag is hard to see unless you squint. But both of my choices are sharp and if you're in and around Tulsa or in Oklahoma- text your vote in! You've got three sharp looking choices and two choices that I think would make you an excellent flag.

(Speaking of which: I'm going to have to follow up and check to see if Iowa City has a flag- and if it does have a flag, what the heck is it and can we and should we do better? I think we probably can and should- especially what with us being a UNESCO City of Literature and all.)

*I know we've already done the flag of Chicago, but I stumbled across this Medium article about the story behind it's flag that I thought it was worth adding a bonus.