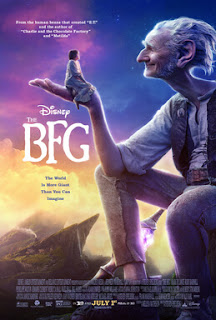 I've been trying to read to Austin more often (for a variety of reasons- not least of which is that I think the more you read to kids, the more they're going to want to read and the more they read, the better of they'll be) and one of the books we just finished was Roald Dahl's The BFG- now, he had already seen the movie at some point along the way, but obviously since we just finished the book*, that meant that we had to watch the movie again.

Sophie (Ruby Barnhill) is a ten year old orphan, who stays away reading because of her insomnia- around 3 AM one night, or what she calls 'the witching hour' she sees a large, elderly giant outside her window- when the giant sees her, he captures her and takes back to Giant Country. Once he reaches his house, he explains to Sophie that she must stay with him for the rest of her life to keep the existence of giants secret. She soon learns that the giant's name is The Big Friendly Giant (Mark Rylance) and he's the only vegetarian in a group of man-eating giants. One of them, the Fleshlumpeater (Jemaine Clement) shows up, smells Sophie and almost eats her before leaving. The BFG gives her some new clothes and together they head out to Dream Country to catch dreams together-- but not before the other giants catch the BFG and toss him around for fun. Sophie runs away and stays hidden, but drops her blanket in the process. As they head out to Dream Country, Sophie encourages the BFG to stand up to the other giants.

In Dream Country, they each catch a dream before heading off to London to spread good dreams to sleeping children- but when Sophie realizes that she has lost her blanket, the BFG leaves her behind at the orphanage again, explaining that the last human child he took and raised was discovered and eaten by the other giants. Sophie, unwilling to be left behind, takes a chance and jumps out her window, banking on the BFG to catch her- which he does. Returning to the BFG's home, the other giants barge in and trash his place, looking for Sophie and finally, enraged, the BFG drives them off and, discovering a portrait of Queen Victoria in the home where the other child the BFG had taken lived, she hatches a plain to appeal to the current Queen for help.

So, together they mix up a dream for the Queen, detailing the activities of the giant and in the dream, the Queen will wake up and find Sophie on her window sill- so that means they have to sneak into the grounds of Buckingham Palace and place Sophie on the window sill. Sure enough, though, everything goes as planned and the Queen (Penelope Wilson- who actually played Prime Minister Harriet Jones in Doctor Who, strangely enough) wakes up, finds Sophie on her window sill and is soon convinced by the BFG of the existence of giants and their danger to her subjects- so she sends the Army and the Air Force out to Giant Country to capture the giants (which they do) and air lift them to an uncharted island with plenty of snozzcumber seeds so they'll have plenty to eat. Then, the Sophie and the BFG go their separate ways and the film ends with Sophie narrating that whenever she feels lonely- she talks to him and he can hear her and smiles.

Overall, this was a relatively faithful and visually stunning adaptation of the book. They sort of downgraded some of the darker parts of the book (the giants at the end get thrown down a deep dark hole and left there as a posed to be taken to a nice, uncharted island) and Sophie doesn't get adopted by the Queen's maid and get to live in Buckingham Palace at the end of the book. But those are nit-picky at best. (Plus, I think it has something to do with Stephen Spielburg being the director. Everything's got to have a sort of glossy golden nostalgia with a slightly melancholy ending and this is no exception.)

What bugged me the most? Well, it was apparently the universe where the Queen still exercised absolute political authority over the Armed Forces and government and/or it was the late 1980s where Ronald Reagan was still President and/or Boris Yeltsin in charge of Russia or the Soviet Union. (Though to be fair, it was sort of amusing to imagine the 'Boris' she calls at the end being Prime Minister Boris Johnson and then, it that case, I'm glad the Queen has so much power.)

But again: if that's the biggest complaint you can have about what's fundamentally a movie for children, then how bad could the movie have been? Answer: not bad at all- My Grade: *** and 1/2 out of *****

*We're now tackling Redwall, which means I'll have to dig up the animated series.