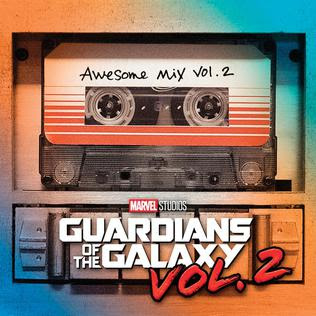 I haven't done too many soundtracks on this long, strange trip of mine, but the first Guardians of the Galaxy had such an excellent, almost iconic soundtrack, I couldn't wait to get my hands on the second one- and for the record: I haven't even seen the movie yet! That's how pumped I was for this thing...

The first soundtrack was packed full of songs I recognized- I knew all the artists and had heard and liked at least 10 out of 12 tracks- the second volume goes for some deeper cuts- I've heard and liked about 5 out of 13 tracks. And I recognize only nine out of thirteen bands. You'd think that the deeper cuts would make it harder for a listener to connect to a soundtrack, but once again, the minds behind Guardians of the Galaxy prove me wrong.

The fun starts with ELO's Mr. Blue Sky: awesome song- I'll have to see the movie to be sure, but for some reason ELO really works. (There was a Tennant Doctor Who ep that used 'Don't Bring Me Down' to great effect. Also, I think they used this one too.) Right away, you get something you recognize and get drawn in.

Next, Sweet's Fox On The Run: did not know that this was Sweet! Awesome song that's gotten heavy airplay in all the trailers for the movie. True story: did not know a single Sweet song other than 'Ballroom Blitz' so I'm glad to expand my repertoire.

Aliotta Haynes Jeremiah changes the tone with 'Lake Shore Drive', and then Fleetwood Mac chimes in with 'The Chain' (Rumors remains one of the best albums ever made.) Things get soulful with Sam Cooke and 'Bring It On Home To Me' then Glen Campbell and George Harrison perk things up a bit with 'Southern Nights' and 'My Sweet Lord' but it's Jay and The Americans that drop the most interesting song in the soundtrack into the back half of the album. 'Come A Little Bit Closer' is a super old school song (I guess they were big back in the 60s and came up with Lieber and Stoller) that embeds itself in your brain and is one hell of an earworm.

Cheap Trick's 'Surrender', Cat Stevens' 'Father and Son' and P-Funk's 'Flashlight round out the album without  too much fuss.

I guess it depends on how you judge soundtracks, but to me, the mark of a good soundtrack is that it makes you want to sit down and watch the movie again. (Again, I really need to sit down and watch the first movie again and I really want to get to see the second movie.)  But in general, this is, as advertised a truly Awesome Mix. There's more of a 70s flavor to this soundtrack than the first movie (which had more of an 80s feel) but the choices for the soundtrack are all solid, kick-ass, home runs.

Overall: While I have yet to determine if the 2nd movie is as good as the 1st, I can now say with certainty that the 2nd soundtrack is just as good as the first. A worthy successor in every way, it's worth a spin on your Spotify if you are so inclined.  **** out of ****