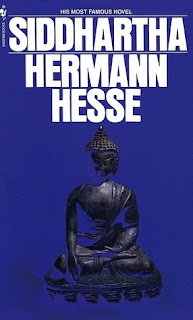 Well, it's short. I'll give it that. Coming in at one hundred and fifty two pages, Siddhartha is a fast read. Initially, I assumed that they were talking about the man himself, Gautama Buddha- but Hesse is in fact, talking about another Siddhartha, his main character- the man himself does show up in the book, but as Gotama, the Enlightened One that Siddhartha encounters on his travels.  But- backing up a second:

Siddhartha is the young son of a rich Brahmin, who, feeling no satisfaction with his comfortable life decides to discard it and seek a life of contemplation, joining the Samanas and becoming an ascetic and renouncing all his personal possessions for a life of poverty- his friend Govinda joins him and Siddhartha fasts and meditates in search of spiritual enlightenment- he finds no answers and eventually he and Govinda seek out the Gotama and attempt to find wisdom from his teachings. While Govinda makes the decision to join Gotama's order, Siddhartha leaves him behind saying that while the Gotama is supremely wise, his teachings do not taking into account the distinct experiences of a person- that individuality means that true wisdom cannot come from a teacher- so he carries on his quest alone.

He comes to a river and a generous ferryman takes him across and when Siddhartha is unable to pay, the ferryman tells him that Siddhartha will return to the river later to bring payment of some kind for him. Siddhartha goes into the city and lays eyes on Kamala, the most beautiful woman Siddhartha has ever seen. He requests instruction in the art of love, but Kamala advises him that he will have to earn her affection by making money and becoming a man of wealth. He abandons his ascetic life and soon becomes a successful businessman and a rich one as well. He becomes Kamala's lover and reaching his middle years that his lifestyle of luxury is a game that has nothing to do with his quest for spiritual enlightenment. He leaves it all behind and heads back to the river, considering ending his life. An experience with the Holy Word 'Om' and meeting Govinda again who is passing through the area as a wandering Buddhist.

Siddhartha decides to stay by the river, where he reunites with the Ferryman from many years ago and decides to live a simple life and work as a ferryman beside the river which is giving him so much spiritual inspiration. Years later, Kamala, now a Buddhist convert comes through, trying to reach the Buddha who is on his deathbed, accompanied by a child that he recognizes as his son. He struggles to be a good father to the boy, who resists at every turn- used to a life of comfort and leisure and not a life of poverty and eventually, the boy runs away. Siddhartha wants to go after him, but the Ferryman advises him to let the boy find his own path, the same way Siddhartha did when he was young.

The Ferryman eventually leaves for the woods at the end of his life, claiming his work is done and Siddhartha is alone again until Govinda finds him once again at the end of their lives and finally understands that Siddhartha has found the enlightenment that he seeks.

It seems strange that I'm reading so soon after Zen and The Art of Motorcycle Maintenance (which was everywhere in the news last month thanks to the passing of it's author, Robert Pirsig.) Siddhartha is another book drenched in philosophy- thought it's more accessible than Zen's was. I like the fact that Siddhartha rejects the Buddha, realizing that true enlightenment has to come from within and not through the teachings of anyone. That appeals to me and feels right- spirituality is different for everyone and I'm a big 'internal, uber-private, wrestling match' kind of guy. But Hesse drops in another nice metaphor with Siddhartha's connection to the river- his eventual realization that everything is connected and that time is an illusion and nature is in fact cyclical fits perfectly with the idea of the river. It keeps flowing.

While I understand the motivations for the character essentially abandoning his child, it also bothered me. The reasoning behind Siddhartha's choice made sense: he had to let go of his parents to find his own path, so it makes sense that his child would have to do that as well. But I didn't like that. I understand it and it rubbed me the wrong way.

Overall: This was a nice, quick read, written in an accessible, lyrical style that I enjoyed. I'm going to go with *** out of ****.