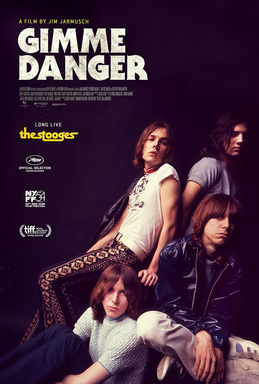 Things have been weird lately, which made this the perfect documentary to sink my teeth into. I should clarify: by weird, I mean that I keep stumbling back into bands that I had forgotten that I had gotten in pretty deep with at some point back in the day. I had my odd Rod Stewart period (from the Faces all the way through to 'Do You Think I'm Sexy'), I watched Almost Famous a few times and then suddenly I got into Yes in a big way and for awhile I was really into Iggy and the Stooges.

So, this documentary was a pleasure and a half to watch.

From the genesis of the band in the wilds of Ann Arbor of the 60s, through meeting each other and their early association with the MC5 before breaking out and falling apart in the 70s before finally coming back together again in the late 90s/early 00s, it's been a wild ride for Iggy and the Stooges and Jarmusch wisely keeps the focus on his subjects. There's little to no narration, just the members of the band, telling their stories from past to present.

Growing up in post-war Michigan, all of the band members seemed to have points of commonality: their Dads had all served (Ron Asheton related the odd hobby he and his Dad developed of collecting Nazi memorabilia.) Their childhoods were pretty rough. They just sort of met at school, thought they all looked bad-ass and started hanging out together and sort of fell into a band. Where it gets really interesting is when they meet the MC5. While MC5 were more overtly political, The Stooges were not- the man himself, Iggy Pop says, "I just wanted to be." And while that might have tagged them with the whole nihilism thing that seems so common with punk, it's a simple statement of philosophy that I dig a lot. (Plus, if Iggy Pop couldn't be any cooler: he played a Vorta on an episode of Star Trek: Deep Space Nine.)

I'm sort of struggling to come up with anything else to say about this documentary and I think that's sort of a good thing at the end of the day. It's taut, well directed and doesn't waste time- it lets the members of the band tell their story themselves- the archival footage is a raw and gritty look at the 70s. This is a band that was extraordinarily influential in music and a documentary to tell their story was long overdue.