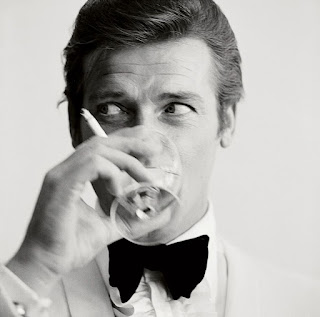 As if the world wasn't gloomy enough following a barbaric terrorist attack on a teenage pop star's rock concert in Manchester, Roger Moore died Tuesday at the ripe old age of 89 following a short battle with cancer. This genuinely, really and truly, bums me out. In terms of my generation, my 'Bond' should have been Timothy Dalton or Pierce Brosnan, but thanks to my parents, the Bond that I was first introduced too and really, the Bond that I grew up with was Roger Moore.

First Bond movie I ever saw was Live and Let Die. As they began to release them on VHS back in the early 90s, we seemed to gravitate more toward Roger Moore movies than any other Bond movies. (I think Goldfinger was the only Connery movie we had on VHS. We added Octopussy, For Your Eyes Only, Moonraker and A View To A Kill to our collection.) Moore, I think, was the perfect tonic for the ulta-serious Connery-era Bond, He never took himself too seriously and invested his time in the Bond franchise with a certain amount of self-deprecating humor and one liners that could go overboard at times, (see: Moonraker, The Man With The Golden Gun) but ultimately made his movies fun to watch.

(I never saw any of The Saint as a television show, but I enjoyed the hell out of Val Kilmer's movie- and I think I used to have it, actually. I would have loved to have seen the television series- maybe I'll look that up sometime.)

Post-Bond, I know he was very active in UNICEF and as a humanitarian- I guess he worked with PETA to fight against foie gras (who knew, right?) and in general, it was always a pleasure to see him pop up here and there over the years- I remember Alias had him guest star for a couple of episodes and it was an absolute delight.

By all accounts, he lived a long, full and happy life and the stories I've been seeing this week about how gracious he was with fans and just people in general make me think that he was a genuinely decent and good guy. There aren't enough of those in the world these days so once I get to my weekend, I'll mix myself a vodka martini (albeit a dirty one), shaken not stirred and toast his memory. (Come to think of it, the Parentals have all the Bond movies on blu-ray, so maybe an impromptu Roger Moore film festival shall happen this Memorial Day Weekend!)

(Live and Let Die will always be in my favorite Bond list because it was the first one I ever saw. But, I'd say The Spy Who Loved Me, Octopussy and apart from the weird sub-plot with the teenage figure skater and a plot that is more or less blatantly recycled in Tomorrow Never Dies, For Your Eyes Only ain't half bad either.)