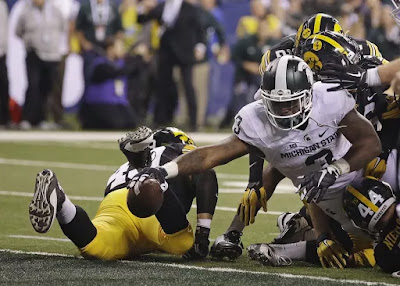 The length of the average human arm is 25 inches. That's how close we were last night- that second effort, that last gasp, that last heave over the end zone to break the plane and score the touchdown... I had been worried since halftime about the offense's lack of ability to move the ball- but they got lucky once with a deep ball to break the deadlock and ever since then, Michigan State had been controlling the ball, moving it effectively- gashing us with runs and forcing their way down the field.

We were close, we were agonizingly close. That 4th and 1 that just made it. Then, inches away- first down, second down, third down... and finally that last gasp effort broke us. Agony. Excruciating, beautiful agony as it slipped away. 27 seconds left and 25 inches, the length of the average human arm. That's how close Iowa came- to a Big Ten Championship and a shot at a national title.

If you're going to lose, there are few ways more painful to lose. I saw a few comparison to the Alabama-LSU national title game floating around out there- but I don't think that's quite right. I found that tedious, this was riveting. Granted, I may have some obvious biases due to the teams, but seriously...  this was a chess match that came down to the last piece on the board. You can't say we didn't leave it all out there on the field, because we did.

But what a glorious consolation prize- the Rose Bowl. I think if you would have taken a poll before last night's game about whether or not Iowa Fandom preferred a shot at the title and getting into the playoff or a trip to the Rose Bowl to face whomever, I think the vote would have been closer than you would think. This is a really, really big deal to a lot of Iowa fans. Tickets on StubHub- the cheap ones, mind you, are hovering around $600 and I'm willing to bet bank accounts around the state are being emptied and plans are being made.

Last time we were in the Rose Bowl, I was 7. I didn't understand much about football at the time, but I understood that it was a big deal. Legendary. The myth. The weight of the game- whatever the hell it was, it was a really, really big deal. I remember we lost- and I remember enjoying the beat down we gave Washington in the 1995 Sun Bowl quite a bit as a result. But since then, it remained elusive. In '02, we were denied due to the order that the bowls picked. In '09, we went down in overtime to Ohio State and they took the Big Ten title and the trip to the Rose Bowl.

It's been a long quarter-century and it's amazing that we're going back. You don't see them all that often anymore, but every once in awhile, I'll be driving around town and catch a glimpse of the old familiar rose with the message: 'WE SHALL RETURN'.  It took longer than anyone anticipated but Iowa is on it's way to Pasadena. And it's so, so awesome. 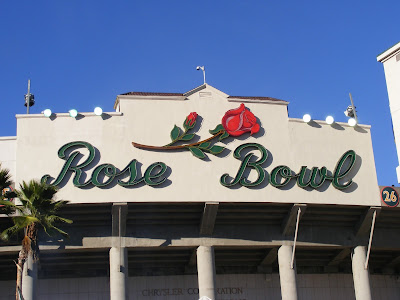 Well...  that sucked. Iowa got stomped hard by Stanford* two days ago in the Rose Bowl and everything old was new again, because the last time we were in the Rose Bowl, Washington put up 46 points on us and Stanford** pretty much punched us in the throat immediately and never really let up. Things go a little better in the second half and Iowa clawed back a little bit to make it hurt a little less, but man...  that sucked. It sucked because this team was better than that. It sucked because it exposed the fact that for all it's power, the one thing Iowa's defense lacked was some serious speed and it sucked because these moments don't happen all that often for Iowa and if (and I really hope we don't) we have to wait twenty five more years to get back to a Rose Bowl, I have to wonder if there will still be bowl games for us to go to.

Iowa's window was narrow when it came to stopping McCaffrey- if you didn't get him at the line of scrimmage in the first few seconds and let him break that first tackle, he was going to turn the jets on and make you eat it. And eat it Iowa did. Hard. I know everyone always complains about the Big Ten's supposedly 'weak' non-conference schedule and there's been talking of trying to change that with scheduling more Power Five opponents in the non-conference- so here's my modest proposal: let's set something up with the Pac-12. We don't have to be suicidal and take a run at UCLA or USC or Stanford, even, but let's play Colorado. Or Washington State. Or Oregon State. Let's schedule some home and home series against them and get some experience playing in the Pacific Time Zone, because if you look at our history- we're sort of terrible once we get west of the Rockies.

In terms of Bowl games- 2010's win against Missouri in the Insight Bowl was our first 'western' Bowl will since the 1987 Holiday Bowl versus Wyoming. (We tied BYU in the Holiday Bowl in 1991.) While I know nothing about recruiting and can't really assess how much the speed deficit on display two days ago is a long term problem- I feel like the time zone issue is a simpler one to potential solve. Your program sucks west of the Rockies? Play there more than once or twice in a decade and they might get used to it. Or maybe they won't, who knows. (Maybe the time zone has nothing to do with it at all.) But if we want to get back to and win a Rose Bowl someday, it might help to play our most likely opponents once in awhile.

But there's the real rub. Will it be another 25 years? God, I hope not- because even on television, the place looks like a damn temple to the sport. But you have to wonder about the effect that the College Football Playoffs are going to have on games like this. Are there too many bowls? Yes. No 5-7 team should be in a bowl and if that means that aren't enough teams and too many bowls, maybe have fewer bowls? I think, eventually, what you will see is an 8 team playoff and maybe half the bowls we have now- perhaps eventually around a dozen or so of the most prominent bowls that have been around for awhile. (I myself, did not know that there had been 57 Liberty Bowls, but there you go.) I don't think you'll ever get rid of them entirely though- there's too much money in them (too much corruption in others). My wish would be that eventually the Rose Bowl just gets back to the way it used to be: Big Ten versus Pac-12, their champions preferably- but if they're busy in the playoffs, then the best available team each conference has.

And if it's another twenty five years until we get back to the Rose Bowl, well, I'll be 57. My kids will be 30 and 26 respectively and I don't care if I have to sell a kidney. Next time, we're going. Because, well, if they're not making those bumper stickers again, they should be. I sort of want one for my car.

*Personally, I enjoy Stanford's band. Seems like a bunch of stoners sort of took over the marching band back in the day and that's been their aesthetic ever since. That said, if you're going to be dicks to your opponents, be accurate and factual dicks. Wisconsin is cows. Iowa does corn. And pigs. Not to mention the fact that the nation's largest agricultural state is...  California.

**Ugh. That damn tweet from Carly Fiorina.  Just rep your alma mater, FFS. It's like Michelle Bachmann's jersey when she went to the Iowa-ISU game when she was (shudder) running for President. She even had a good excuse, being from Waterloo- she could have and should have (god, I hope whichever idiot staffer told her this jersey was a good idea got fired) repped her home town team of UNI. Same deal here. So you went to Stanford... rep your alma mater already. Don't get your pandering all over the Rose Bowl.