This Week In Vexillology #149

January 16, 2016
This Week In Vexillology, we're going to take a look at the flag of a country that came into being on January 1st, 1993, following one of the biggest and most amicable divorces in history- yes, it's one half of the country formerly known as Czechoslovakia- the Czech Republic! 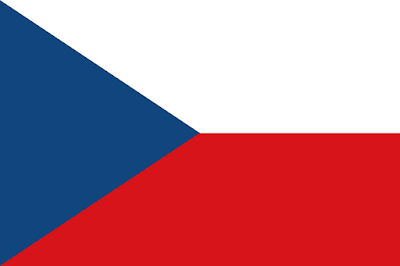 While the Czech Republic has only been around since 1993 or so, they kept their existing flag in the 'divorce'* so this flag was actually adopted for national and civil usage on March 30, 1920. Originally a bi-color of white and red, recalling the colors of Bohemia, the blue triangle was added to distinguish the flag from that of Poland. (It also represents the state of Moravia.)

This whole divorce thing gets interesting when you do a little more digging on it- pace Wikipedia (The Font of All Knowledge), the notion of a Federal Czechoslovakia was a popular one on both sides- though many Slovak parties wanted a looser confederal arrangement and when Czech parties were elected that wanted a tighter federation instead of a looser one, that sort of forced the issue. But get this: in September of 1992 a poll had only 37% of Slovaks and 36% of Czechs favoring divorce. I guess my question would be then, why do it? Perhaps it was inevitable and it would be interesting to see the numbers now on whether or not both sides still think it was a good idea or not. However, I will say this for the notion: it sure beats doing it the way Yugoslavia did it a few years later and given the distinctions between Czechs and Slovaks, perhaps creating two homogeneous nations was a smart move in hindsight. 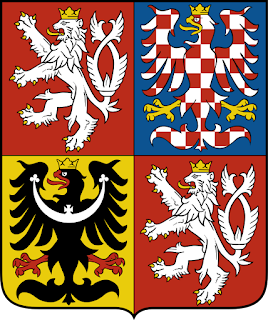 I think the Coat of Arms of the Czech Republic are also worth touching on because, well, look at this- they're pretty bad-ass looking. Representing the regions of the Czech Republic, they are in order from the top left- the red and white lion, which is the emblem of Bohemia, followed by the red and white eagle on a field of blue, which is taken from the arms of Moravia, then the black eagle on the yellow field represents Silesia and then they threw in Bohemia again just to fill out the shield.

(It's also worth noting that despite the Czech Republic's presence in the mid-eastern part of Europe my handy-dandy reference guide assures me that the red, white and blue have nothing whatsoever to do with pan-Slavic colors)

*Actually, I did a little more digging on this. Turns out the 'divorce' agreement permitted neither state to use existing symbols of Czechoslovakia, but the Czech Republic sort of said, 'meh' and did it anyway.