A Farewell To Anchor Christmas Ale 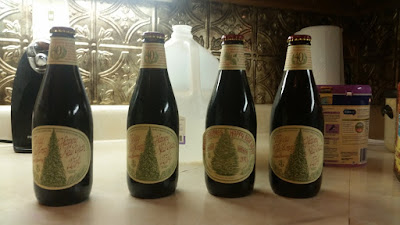 Christmas of 2015 breaks a streak for me that dates all the way back to 2009 or so- but after some reflection, I think it's time to retire it. Yes, I'm saying farewell to Anchor Christmas Ale- at least the part where I age and hoard bottles over the course of several years so I can compare and contrast tastes every Christmas. But it might be time to bid a fond farewell to Anchor Christmas Ale altogether too... I just don't know.

You see, what started me on this little journey was finding out (from The Quiet Man, probably.) That Anchor switches up the recipe for its Christmas Ale every year and that people age bottles of if so they can go back and compare and contrast them every year. Now at the time (and yeah, I still am) I like Anchor's stuff. It's good, solid, hearty- probably a little higher in ABV than the average beer, so I dug it and figured why not. So, over the course of the next several Christmas's I grabbed sixers, I chilled them, drank them and saved a bottle for the next year so I could compare and contrast.

The problem became apparent though: the recipe doesn't really change all that much over time. Schell's Annual Snowstorm offering changed styles from year to year- while Anchor seems to be more intent on making subtle, incremental changes to their recipe. Some years, Anchor would taste more like a deep, mainstream winter beer and other years it would be more botanical- even piney, as if they had distilled a Christmas tree down to a beer and put it in the bottle. But was there a lot to compare and contrast? Maybe. I'm not really a hardcore beer guy- I'll drink it, but whiskey is more my speed and after six years, while I'll probably still grab a sixer if I can find it or if the mood strikes me, but I'll drink them all, not save them. Ageing this beer just takes up too much room in my fridge and the comparing and contrasting is getting far too subtle for my liking.

I tried to sit down and analyze a bottle of the 2014 and the best I could come up with was that it tasted vaguely of root beer or possibly Jaegermeister. There were definite botanical notes that weren't unpleasant but didn't exactly make my socks roll up and down either. I will give it some credit though: even two years later, there was still a distinctly festive feel to it- like you could imagine drinking this on a snowy winter night with hot buttered rum or mulled cider or some crap like that.

I sort of stopped trying on the rest of the bottles though. I think I randomly drank the 2nd 14er the next night and wrapped up the 3rd with an episode of Making A Murderer. I closed things out with the sole survivor of 2013 just last night, but then Little Dude start getting fussy, so I wisely decided to prep him for bed and shut things down for the night.

So, Adieu to Anchor Christmas Ale. Guess I'll have to find a new Christmas Tradition for next year...