This Week In Vexillology #150

January 23, 2016
This Week In Vexillology, we're moving just south from the Czech Republic to take a look at a flag that (surprisingly) has proven to be beyond the reach of my handy-dandy reference guide (which was published in 1997) and the Republic of Serbia adopted a new flag in 2010: 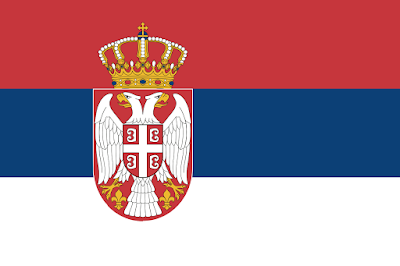 The flag of Serbia was adopted in it's present configuration on November 11th of 2010, which makes this flag pretty damn new, While the flag of the post-90s rump Yugoslavia that was made up of Serbia and Montenegro also featured a horizontal tricolor, the order of the colors was different- the last flag of the 'union' between the two countries was blue, white and red, while the Serbian Tricolor is red, blue and white. Either way, the explanation for the colors remains the same: they are 'pan-Slavic' colors. (I finally did some digging on that, by the way, because 'oh, they're pan-Slavic colors' gets to be an irritating explanation after awhile. What the hell does it even mean? Where did it come from? The TL;DR version: the flag and it's variations emerged after the Prague Slavic Congress of 1848, which was called to unite the Slavs to resist increasing German nationalism. The tricolor of red, blue and white was based on the Russia flag, which dated back to the 17th Century.  The Russians, however, got their flag from the Dutch, I guess. Long story short, they voted and these were the colors they liked.)

The Coat of Arms in the hoist of the flag aren't the full-blown version of the Coat of Arms of Serbia- they are, 'the lesser coat of arms' but no less significant in their meaning. The white, double-headed eagle is a symbol of Serbia that dates back as far as 1190- though its roots may go all the way back to Byzantium itself. The cross on the shield has been a symbol of Serbia since 1345- despite being a Republic, the crown of the former monarchy appears above the shield.