This Week In Vexillology #147

January 02, 2016
I had been trying my best to be methodical last year with This Week In Vexillology- we knocked of Africa, Central America and South America and I was all ready to make my way through the rest of Europe when I decided to shake things up a bit by throwing down a curveball. This month, three out of our four flags belong to countries that declared or won their independence in January. First on deck, a country that established it's sovereignty on January 1st, 1804: The Republic of Haiti 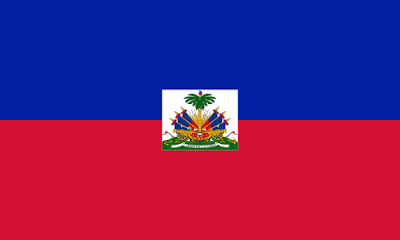 As with most former French colonies, it's somewhat dispiriting to admit that the blue and the red in the flag were taken from the Tricolore-- however, there's a cool twist with the Haitian flag, because apparently during the rebellion against France in 1803, Jean-Jacques Dessalines* somewhat (I'd imagine) irritated with the French, tore up a Tricolore and then the blue and the red were just stitched back together to form the basis for the flag of Haiti. (Question: does this mean the Haitians are down with liberte and fraternite but not egalite? Or is that over thinking this?)

An alternative flag of vertical black and red panels has also been used from time to time- most recently during the Duvalier Regime that ran from 1964-1986. (Both Papa and Baby Doc are worth a Wikipedia read if you know nothing about Haiti.)  The coat of arms appears on the flag for official and state purposes and the overall flag was adopted on May 18, 1803 for national and civil usage.

The Coat of Arms are kind of cool-- the palm tree in the middle represents independence (it's a royal palm- which I guess is significant? But hell, to me, a palm tree is a palm tree, right?) And on top of the palm tree- though it's kind of hard to see? That's right! Our old friend, the Cap of Liberty. There are various weapons arrayed at the base of the palm tree, which signify the people's willingness to defend their liberty and the national motto, 'L Union Fait La Force' or 'Union is Strength' runs along the bottom.)

So there you have it- we're starting off 2016 right with the flag of Haiti! Remember, until next time- keep your flags flying- FREAK or otherwise!

*OK- TL;DR on Haitian Independence: dude by the name of Toussaint L'Ouverture lead the most successful slave uprising since Spartacus to kick the French out of power, but was forced to resign by forces sent to restore order by Napoleon. He was deported to France and died in 1803 and that's where Jean-Jacques Dessalines took over and finished the job to get Haiti complete independence.