Bookshot #85: The Trip To Echo Spring 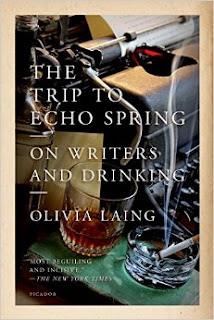 It's not often that opening lines of a book grab my attention so quickly, but this one did: "Here's a thing. Iowa City, 1973." The Trip To Echo Spring opens with an anecdote about John Cheever and Raymond Carver, both veterans of the Iowa's Writer's Workshop taking a trip in their Ford Falcon down to the state liquor store to buy some booze. Both were drinkers at the time, though and both wrestled with the demon of their alcoholism until they managed to break free, The other subjects of Olivia Laing's fascinating and complex book were not so lucky.

Seeking to explore the link between creativity and alcohol, Laing touches the lives of some of the titans of 20th Century American Literature: F. Scott Fitzgerald, Ernest Hemingway, Tennessee Williams, John Berryman, John Cheever and Raymond Carver- all infamous drinkers- and tries to dig into the link between alcohol, their writing and the price they paid underneath their creativity.

This could have been a pretty dry multi-layered biography of multiple writers, but what makes it stand out is that Laing didn't just sit behind a desk and write about these guys- she actually visits some of the places that were critical and central in their lives to try and get a sense of these men and what drove their darker impulses and made them who they were. She starts in New York before heading to New Orleans by train- Key West, by air and then from New Orleans all the way out to Port Angeles in Washington again, by train. Essentially, it's both a serious exploration of the link between alcohol and creativity, a multi-subject biography that looks at the lives of multiple writers and a travelogue of sorts.  All combined into one book- when you write the basic concept out, it seems insane, but it works. The three basic themes that Laing is exploring balance against each other perfectly

I keep coming back to Cheever and Carver- the two writers she introduces us to at the start of the book. They both eventually conquer their demons and bought themselves a decade or so of peace at the end of their respective lives- but there's a weird contrast between the two men- Cheever wrestled with shame at his origins, while Carver's less than privileged origins were the source of his resentment against the family he acquired at a young age. There's a curious duality linking the two writer's in the narrative and you can see threads of that throughout- Berryman and Hemingway committed suicide. Fitzgerald and Williams wrestled with their success and depression and anxiety respectively.

The trauma of youth also unites them- Hemingway's father killed himself, Tennessee Williams was so consumed by his anxiety he fled his native St. Louis and actually changed his name to Tennessee, that's how much he hated and resented his child hood. Cheever's father (also an alcoholic) tried to drown himself- and Cheever remembered talking him out of it. Berryman's descent and struggle to stay sober was harrowing and ended up in his own suicide.

A lot of this book is depressing a lot of this book is fascinating, but to me the real strength of the book comes into play on Laing's final trip west to Port Angeles, where Raymond Carver spent the last years of his life after becoming sober and he managed it- even flourished after a fashion. The coda, the closing note of this long and melancholy book is a simple one: redemption and recovery are possible for everyone, even these titans of literature. It's an uplifting counterpoint to the gloom and melancholy that permeates a lot of the book.

Does Laing come away with definitive answers about 'the alcoholic writer', no and I think that's probably a smart decision. She and the reader do come away with a deeper understanding of the devastating role that alcohol played in the lives of these men and how it impacted their writing and creativity and that, I think makes this a book worth reading. Not just for fans of these authors or students of literature- but because their stories, when woven together make for an extraordinary story in and of itself.

Overall: I feel like I would have connected to this book more with a deeper knowledge of all the writers Laing discusses. I know who they all are, but I've only read Hemingway and Fitzgerald really- so I wasn't as familiar with the writing as Laing was. The descriptions of her journey were incredible and really transport the reader into her shoes, but parts of this book were a little bit of a struggle to get through. I think if you were well versed in all these writers it would be an easier and more enjoyable read, but if you only have a passing familiarity with most of them, you might have to lower your shoulder and push through a chapter here and there. So, I have to say: *** out of ****.