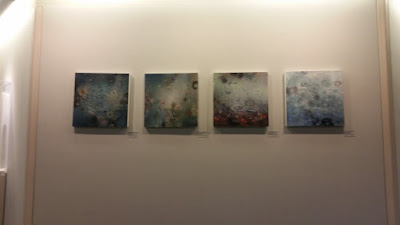 "Is that the cafeteria?"

I was sitting down in a waiting area that, I had just realized, seemed far bigger than it actually was thanks to one wall being a giant facade of mirrors. I had just stopped at the Java House to grab a coffee and something to eat, as my CT Scan had taken about three minutes and my next appointment wasn't for another hour. I shook my head. "No, that's further down that way-" I pointed over my shoulder and back toward the Java House.

"Thanks, man." And then he was gone and I pulled my headphones on and hit play on the last ten minutes or so of the first episode of Serial. (I was starting with Season 1, just to see what I had missed.) I chewed thoughtfully on my almond croissant, sipped at my latte (which was, I think, sugar cookie flavored) and reflected on the general weirdness of the hospital.

It was a strange place. A city within a city within a city, like the center of one of those Russian nesting dolls, if you really got down to it- a huge chunk of the University's western campus that cast a shadow (along with the Athletics Department) over the rest of the University, operating within the city at large. As I saw people streaming by me- maroon colored scrubs, grey scrubs, green scrubs, patients, family members, I idly wondered how many people worked in the hospital at any given moment- I had to imagine it would be the equivalent to a medium sized town.

In general, it wasn't my favorite place to be. A lot of people have a general dislike of hospitals and it wasn't that. Sick people don't freak me out and if you have something (like I did) that you want to try and nail down and probably fix, hospitals might be the only place you have to go. No, it was this Hospital that I found to be irritating. It just sat there, a gargantuan mega-city of medical prowess, an island unto itself. It didn't have play well with others. It ran itself and didn't really care all that much if the way it did business got stained your front lawn purple.

On an impulse, I finished my croissant and hopped on the elevator all the way up to the 8th Floor. There, I wandered through the Medical Museum. (Which I had always secretly wanted to visit- it was like the hidden museum on campus. You had the Old Capitol, the Museum of Natural History, the Art Museum and then the Medical Museum.) It... was interesting. I was sort of short on time, so I took a glance through a couple of galleries- saw an iron lung and old school wheelchair but missed the weighted speculum that had so horrified The Missus, apparently. What did catch my eye, as I was leaving to head down to the ENT clinic, however, were the aerial photographs of the west campus over the decades.

The biggest one was probably the most astonishing one. Only two dorms on the West Side- (no Rienow, no Slater and Quad still had four sides instead of three) nothing where I was standing actually existed yet- it was just an empty field and that had been as little as five decades ago. The amount of constant growth and change in the complex was amazing.

My second appointment was a good news/bad news kind of thing. (I should divert a second here: I had gone through the kerfuffle of getting a CT to have my sinuses checked to see if I was a good candidate for a rotor-rooter job on them. I get pressure headaches and winter months seem to be an interminably long sinus infection instead of the a season of joy and happiness, etc etc. TL;DR the majority of my phlegm seems to drain down my throat instead out of my damn nose and I wanted to find out why.) Turns out, I have large frontal sinuses- which will not be a surprise to anyone who has ever seen the size of my head. But they were relatively free of crud. As were all the other sinuses we checked but it turns out, my nasal passages, while not deviated, were fairly dark and twisty- so any swelling or irritation would block them very easily.

I could talk to a sinus surgeon if I wanted to, but nasal sprays and sinus rinsing is going to be the best way forward for now. Nasal sprays.., I hate nasal sprays. All they've ever managed to convince me of is that I would be a terrible cocaine addict. Can't stand the sensation and all they do is make me sneeze- not over time, of course, but incessantly and immediately, thus, negating all the good they allegedly do. Sinus rinses, despite the fact that I find the bottle to be more palatable and effective than the cumbersome Neti-Pot, will always make me ever-so-slightly twitchy and paranoid thanks to stories about brain eating bacteria.

But, CT scans do not lie. And at least I left knowing that it wasn't my sinuses, but my twisty, bendy nasal passages that were to blame. Maybe I'd need a nose job at some point, but for now it didn't really make a lick of sense to me- a fact confirmed by the Doctor. Rinse, spray and repeat- that was my fate and my solution- at least for now. So, I made my way back into the M.C. Escher hell that is Ramp IV (not one ramp, but in fact, three that have all joined together somehow) and found my car, headed for the exit, showed the cashier my validated parking which meant that my trip only cost me $3.

And that was my Hospital morning...