This Week In Vexillology #283

February 23, 2019
This Week in Vexillology, we're tackling one of the big fish in England's happy fish pond of counties with a triple header...  yes, this week we're doing all the ridings of Yorkshire!

In terms of how to get to Yorkshire, it's pretty easy because it's a pretty big place. If you throw a dart at the north of England there's a good chance you'll probably hit Yorkshire. If you're looking for York in particular, then find Leeds head to the northeast and you'll hit York proper. In terms of the ridings of Yorkshire: for the East Riding, find the city of Hull and stay on the north side of the Humber and you're in the East Riding. The North Riding doesn't seem to want to show up on Google Maps, but North Yorkshire does...  it's more or less all the pretty parts of Yorkshire north of Leeds and south of Middlesborough. West Yorkshire is pretty much Leeds, Bradford, Huddersfield and points between.

So, let's talk about their flags. First up, East Riding: 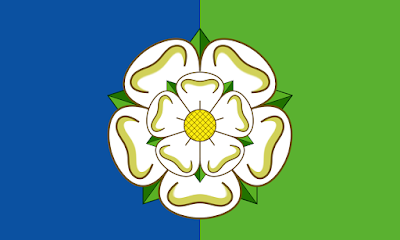 Registered with the Flag Institute in 2013 as the winning entry in a design competition. It features the white rose of Yorkshire set against a bicolor of blue and green. The blue stands for the sea and maritime activities of the riding and the green stands for the rich agricultural land of the riding. Now, the initial thought I had was: why aren't the blue and the green swapped- as that would mirror the actual geography of the riding- but it turns out there's a reason for the blue being so close to the hoist. It represents the connect to the rest of Yorkshire-- (the white rose on a blue background) and the green represents it's position in the county-- the farthest 'right' geographically.)

Next up, North Riding: 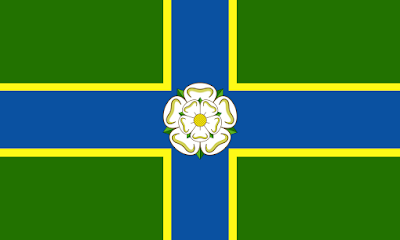 Registered with the Flag Institute in 2013 as the winning entry in a design competition, it features a yellow edged blue cross on a field of green with the white rose of Yorkshire in the center. The yellow and blue are taking from the arms attributed to a local saint, Wilfrid, who was a major figure in the history of the region. With the green field, the three colors stand for the natural features of the north riding: the green for the Moors of North Yorkshire, the blue and yellow for the coastline of the North Sea (and it's sandy beaches.) 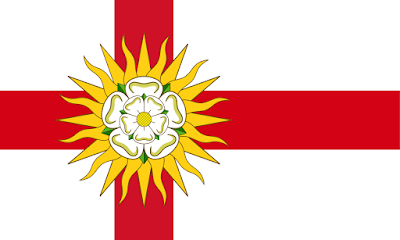 Another winning entry in a design competition, you'll never believe this, but it was registered in 2013 with the Flag Institute. It features a 'rose en soleil' device, which was first used by Edward IV when he took the throne, which combined the White Rose of York with the Sun emblem used by his predecessor Richard II. It's been used by the West Riding in it's Coat of Arms. It's placed over a red Nordic cross on a field of white, which reflects both the colors of the English flag as well as the Anglo-Scandinavian history of the area, tying together the heritage and the history of the region.

So there you are- the three flags of the Ridings of Yorkshire. Remember, until next time keep your flags flying- FREAK or otherwise!