This Week In Vexillology #281

February 02, 2019
We're heading back across England this week (after a random week off) to take a look at our next two counties on our Grand Tour of England. This Week In Vexillology, we've got Shropshire and Staffordshire.

First up, Shropshire. Tucked away on the Welsh border, Shropshire shows up in the Anglo-Saxon Chronicle as far back as 1006. The main town in the county is Shrewsbury and it's  demonym, interestingly enough is Salopian. (Which ties neatly into the county's motto: 'Floreat Salopia', or 'May Shropshire Flourish.') It's got the River Severn, the Shropshire Hills and this bad-ass looking hill called The Wreckin. What's the best way to get there? Depends on what you want to do-- you can find Birmingham and head northwest toward Wales or you can find Liverpool and head south. When you hit Shrewsbury, you've found Shropshire. 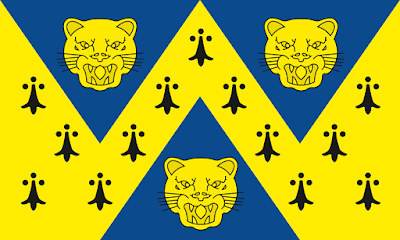 First impression: cool. I love the 'W' and the cat faces...  the colors are striking as well. The flag itself was registered with the Flag Institute in March of 2012. It's the banner of arms of the former Shropshire County Council that was awarded way back in 1895. The kitties? They're actually jaguars and are referred to as 'loggerheads' by the local folks- they date back to 1623. While England (to the best of my knowledge) doesn't have any native jaguars, the 'loggerheads' name seems to be a reference to the practice of carving some kind of face or motif into battering rams back in the day. The gold ermine pattern provides a contrast between the county flag and a lot of the city flags/county town flags which have a white ermine pattern.

Next up, Staffordshire. Right next door to Shropshire in the West Midlands, Staffordshire's largest city is Stroke-On-Trent and... the largest hoard of gold is discovered in a field near Litchfield in 2009? (I know Staffordshire has to be more interesting than that, but literally that's the only thing that jumped out at me on their wiki-page.) How do you get there? Well, find Birmingham and head north until you find Stafford. (Apparently Stoke-On-Trent has it's own metropolitan council and isn't- at least on the Googles, included in the boundaries of the actual county itself- but historically it is part of the county proper.) If you reach Macclesfield, you've gone too far.

Let's talk about their flag: 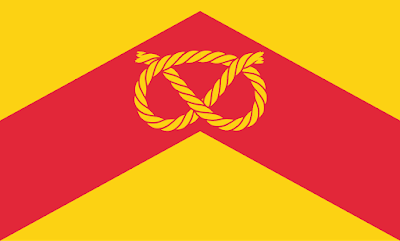 First impression: another striking flag. I love the colors. I love the knot. I love the simplicity of it- it's not busy, it's got a nice clean design. Registered with the Flag Institute in March of 2016, it takes a Stafford knot in gold and places it on the de Stafford Coat of Arms-- it also incorporates a portion of the arms of the Staffordshire County Council. The red and gold color scheme is seen on many arms found into the county including those of Keele University. There's not too much more to it than that, except that it's a perfect tie-in to the motto of the county: 'The knot unites.'

And that Shropshire and Staffordshire! Remember, until next time keep your flags flying- FREAK or otherwise!