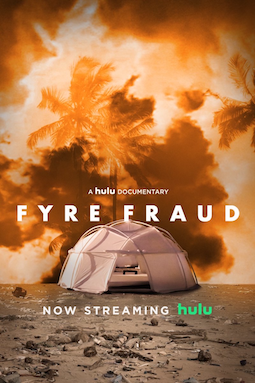 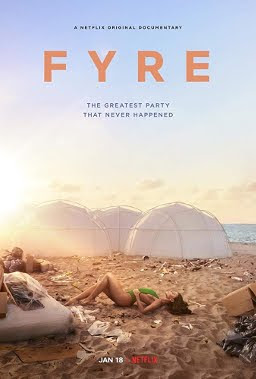 Competing documentaries on different streaming services about the same subject? Sure I'll watch 'em both and compare and contrast to deliver a doubleheader review for your reading pleasure. There's a lot of similarity between the two documentaries, just because they cover the same disastrous subject matter: namely the story of the Fyre Festival which was hyped the next big thing in music festivals in 2017. Except when attendees arrived, nothing was as glamorous or as swanky as they were promised- in fact, quite the opposite. It was a trainwreck of a logistical nightmare: the swank 'glamped-up' bungalows were not in evidence. The private island that was supposed to island? (That belonged to Pablo Esscobar?) That fell through, so it wasn't even there.

Between the two, I think I'd been inclined to give the nod to Hulu's Fyre Fraud, if for no other reason that it scores an interview with the man behind it all, Billy McFarland. It also seems to be a more thoughtful exploration of the power of social media and how shallow it can be- pretty much most of the time. It deals with the rise of that most noxious term, 'influencer' and how one Kylie Jenner post sent Fyre Festival viral.

In contrast, Netflix's Fyre: The Greatest Party That Never Happened, focuses more on the event itself- how the planning went awry, how the attendees arrived and how the fraud exploited so many people and left the native Bahamians that worked tirelessly to try and pull off the festival wondering when, if ever, they were going to going to get paid. (If one good thing came out of this mess, it's that these documentaries caused the internet to do something good for once and help out of one of the victims with a GoFundMe.)

I didn't really pay too much attention to this at the time, but there was a certain amount of schaudenfreude about the whole thing and you can kind of wallow in it with both these documentaries. Not all of us have the cash to hop on a fancy chartered jet to the Bahamas to go to what was billed as the most exclusive hot new music festival. You can't help but feeling a certain amount of glee as you watch people with way more money that sense get what many people would consider to be their just desserts. But in contrast to that, the amount of people exploited, the amount of people who didn't get paid- it's sobering. And it's a reminder that wealth might give you the privilege to go to exclusive tropical music festivals, that same wealth can be used to exploit.

What I didn't know: Ja Rule, of all people, somehow wound up in this mess- which is probably the most random thing about both of these films. Also, the wiki-page for Fyre: The Greatest Party That Never Happened reveals something sort of interesting: Jerry Media, the social media agency that was responsible for the promotion and covering up of this mess. Don't know if that compromises the integrity of their documentary, but it is certainly worth raising an eyebrow over.

Overall: If you're curious to learn more about this mess and why it happened and what was done about it, both of these documentaries will tell you everything you want to know. Because Hulu scored the interview with the man behind it all, Billy McFarland, I'm inclined to give Fyre Fraud the nod, but really, it's just one half of a whole. So, watch both. My Grades: Fyre Fraud, **** out of ****, Fyre, *** out of ****