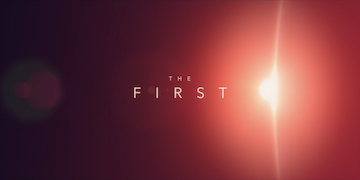 Squawk Box this month features two limited series, both from Hulu: The Looming Tower and The First. I would probably put both of these shows squarely into the category of 'good, but not great' but for entirely different reasons. The Looming Tower suffers somewhat from the fact that everyone knows how the story is going to end, while The First aims incredible high and tries to deliver the goods but sort of gets lost in a muddle of family drama instead.

The Looming Tower is a ten episode mini-series based on the book of the same name by Lawrence Wright. It tells the story of the growing threat of Al-Qaeda in the mid-to-late 1990s and details the rivalry between the FBI and CIA and how it might have contributed to the tragedy of September 11th. Jeff Daniels stars as John O'Neill, the chief of the FBI's New York Counterterrorism Center known as I-49 who is convinced that Al-Qaeda is targeting the United States for attack. Joining him as a new agent is Ali Soufan (Tahar Rahim) a Muslim Lebanese-American FBI agent who joins the squad and eventually becomes a protoge of O'Neill's- he is infuriated by the perversion of Islam by the terrorists and goes undercover into their gathering spaces to try and gather information on their activities.

Opposing them- and really, they're made out to be the villains of the story, is the CIA Counterterrorism Center known as Alec Station. Headed initially by Martin Schmidt (Peter Sarsgaard) and then by Diane Marsh (Wrenn Schmidt) the CIA members of the team all believe that their agency is prepared to combat terrorist threats and, more importantly, that they are the only ones who can. Throughout the series, they consistently withhold information from the FBI while both teams work together to thwart possible terrorist attacks on American soil.

Ultimately, they don't succeed and it's not at all clear that any lessons were learned from it. Here's the thing though... I wanted to say that the events depicted in the series are too close, from a historical point of view, but it has been damn near two decades since September 11th. Which means that proximity to the events shouldn't be as much of an issue, yet to me, it feels like one. There's no new insights to be had here. No real groundbreaking thoughts. It's Zero Dark Thirty for a streaming service. Which is perfectly fine and even good television at the end of the day, but that's all it is. I feel like it could have been more.

The First is shorter than The Looming Tower by two episodes and centers around Sean Penn's astronaut Tom Hagerty. The series opens with Tom watching a mission to Mars launch from the comfort of his home in New Orleans. It feels like he should be on the ship, but he's not- which turns out to be a good thing, because it explodes shortly after launch. Tom runs to the launch site and frantically coordinates clearing away the balloons and the celebratory decorations before the stunned and grieving families arrive.

The failure of the mission and the death of the astronauts throws the entire Mars program into doubt, which sends Laz Ingram (Natascha McElhone) the CEO of the launch provider, Vista to Washington along with Tom to lobby the President and Congress for funding to complete the mission. Meanwhile, the ground team lead by Eitan Hafri (Oded Fehr) work on finding out what happened to the first mission while planning for the second-- Laz, wants Tom to come back onboard, but Tom is reluctant.

We find out through flashbacks about the struggles that the various members of the team go through about their decision to go to Mars and Tom's is tinged with tragedy, as his daughter Denise (Anna Jacoby-Heron)  is struggling with the tragedy of her mother, Diane's (Melissa George) suicide and her own addiction to drugs. She relapses at least once over the course of the series and Tom is wracked with guilt over wanting to go to Mars but not wanting to abandon his only child in the process. Ultimately, he asks for her permission to go, and initially, she won't give him an answer either way- but eventually, relents and absolves him of his decision and the two of them come to- if not forgiveness, then at least an understanding with each other as Tom and the crew depart for their journey to Mars.

It's an honest and interesting look at the human struggle behind spaceflight, so I'll give The First some credit: it's a new and even fresh take on the whole 'space' genre. That said: I think eight episodes was way too short. There wasn't enough time to really meet and connect with the other characters and their struggles. There was some science-y stuff, but not enough. While Sean Penn can indeed act, eight episodes of him looking anguished over what at the very core of it, is a selfish decision gets to be a bit much after awhile. Plus: it's called The First but you don't actually get to see any of them set foot on Mars. And now that it's been canceled, we'll never see them set foot on Mars at all.

Overall: If you liked Zero Dark Thirty and docudramas about events you've already lived through, then The Looming Tower will work just fine for you. If you're a space nut or a Sean Penn fan, I'd recommend watching The First, but if you're hoping for Mars, prepare your expectations for low Earth orbit instead and you'll probably be okay with it.