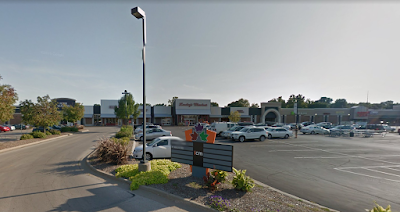 Lucky's Market, one of  the anchor tenants for the Iowa City Marketplace announced last week that it was set to close in early March. Which, naturally leaves Eastsiders wondering what the Iowa City Marketplace is going to do know and what, if anything, can replace that bacon. (Because their bacon was incredible. I will definitely be pouring one out for Lucky's bacon when they close.) There are already a lot of desires floating around there: there's a petition circulating for a Target Marketplace to go in there. People are hoping that New Pioneer Co-op will give up on it's infatuation and quixotic dreams of a bigger and better space downtown and come to the east side, but I think- I hope, that the owners of the Iowa City Marketplace really sit down and think about what could work there long term- and I hope some outside the box, genuinely creative solutions are on the table too.

I'm not against another grocery store. Way back in the day we used to have a Randall's over there. And there was an Econofoods where Slumberland is now in Pepperwood Place. So a multiplicity of grocery store options isn't exactly a new problem for Iowa City. I think if Lucky's was the victim of anything it was probably really bad timing. Both Natural Grocers and Trader Joe's entered the organic/boutique grocery market shortly after they opened and in a town with two Aldi's, multiple Hy-Vees and an existing local co-op brand in New Pioneer that had pretty deep roots in the community.

So if they go the grocery store route, it would either have to be more mainstream but different enough to attract it's own customer base. (I think Target would fit the bill, but I don't know how sustainable it would be over the long term.)

The really interesting thing to consider is what to put in there if you don't want to go with another grocery store. You've got to think about the evolution of the concept of the mall. The whole notion of big, indoor shopping malls I think is dying somewhat and when you see articles full of bad news for large retail chains- Sears just barely survived. Younkers is in trouble. Payless is closing. Then the idea of something large, mainstream and national might not seem like a good idea.That doesn't mean that it can't work, it just means that you'd really have to find the right fit and the right chain to put in there. What that chain might be, I don't know. (Apparently Dollar General really wants to expand to which I'd say 'thanks, but no thanks.' Someone else thought it seemed ideal for a furniture store of some kind- which again, I'd say 'thanks, but no thanks.')

So, let's say you look at the 'replacement chain/tenant' model and find it somewhat wanting. Then you've got to move onto the 'creative, outside the box' options. So far, I've got two notions:

First, a food hall. Iowa City's food scene is okay... I know that seems sort of odd to say, but when you stack us up against Des Moines and even increasingly, Cedar Rapids, we do seem sort of okay. To the best of my knowledge, I don't know of any food halls in Iowa- the closest thing to what the concept appears to be would maybe be NewBo up in Cedar Rapids, but the notion seems more involved than that. But something like this together with the movie theater and you could have a legitimate draw not just for the East Side but for the community as a whole. Include some kind of a community space for events at the like and the Iowa City Marketplace might actually start to feel like a marketplace. The idea would be new, different and hopefully delicious.

Second, and this is more a personal pet peeve of mine: a big gigantic Powell's sized bookstore. Having typed this, I know there's no way in hell it'll ever happen, because despite being a City of Literature, we have like a pitiful amount of bookstores. If we're going to include this on our branding and wrap ourselves up in the City of Literature thing, it'd be nice if it was more than just an exercise in marketing. Literature as a word includes 'all written works' but also has that pesky snootiness attached to it's definition 'especially those considered of superior or lasting artistic merit' which is just like nails on a chalkboard to me. When I write, I want to write something that people enjoy reading. If I'm lucky, it'll transport them somewhere else for a half and hour here and there. If I'm extremely lucky, maybe someone will give me a sexy publishing contract and I'll get to play in the majors for awhile. If I am incredibly lucky, I'll win and award for it. If somehow the stars align and my muse sings the story to end all stories to me and I write it down, I'll reach that 'lasting artistic merit' thing.

But really, I aim for the first part. Everything else (should it happen) it just a bonus after that. Literature is for everyone and every writer should write like it. Being a UNESCO City of Literature is amazing. It's a great honor for this city. But let's not kid ourselves: it's not for everyone. And a store, a project, a community gathering place that chips away at that implied exclusivity of the concept would be something I would love to support and love to see take root in the east side.

Third, and this is purely me pulling something out of my hat because three seems like a good number to have- but what about a creative marketplace? The Farmer's Market is seasonal in nature, but what about an etsy like space where local crafters can hock their interesting products? I've no idea how sustainable this idea is- or even if there's interest in it, but I know they were looking at putting a STEAM Lab in there at one point and I'd support that too. Anything creative. Anything for creators would be fine by me.

Just don't put Dollar General in that ginormous space, okay. That's really all I ask. And don't be afraid to get creative.