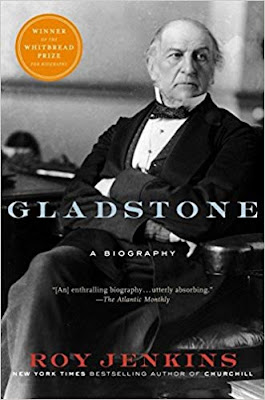 God bless Roy Jenkins. The man was an incredible historian, a verbose writer and a biographer extraordinaire of I don't know how many British leaders- but he also deserves some recognition for producing books that can double both as paperweights and doorstops if necessary, because dear Lord in heaven, does the man write exhaustively about his subjects.

Gladstone is one such staggering achievement. His biography of Churchill awaits my attention at some future date- (I'll need some time to recover from Gladstone.)

Jenkins immediately teases the reader from the opening pages: he considers Gladstone to be the greatest person to hold the office of Prime Minister- and then spends the next seven hundred pages or so making his case. But that initial hook was enough to get me interested. I didn't know a lot about Prime Ministers outside of the 20th Century. I have William Hague's biography of Pitt the Younger still kicking about somewhere that I need to tackle. I read an excellent history of the full breadth of the Napoleonic Wars that opened my eyes to the complexities of that particular conflict and of course, I knew who both Gladstone and Disraeli were and honesty, found the latter far more intriguing than the former.

By the end of this book, however, I'd changed my mind and was convinced. It's hard to think of another Prime Minister that dominated British politics the way Gladstone did over the course of the 19th Century. He was Prime Minister for twelve years, spread out over four terms. He was Chancellor of the Exchequer four times. He formed his last government, in 1892 at the ripe old age of 82. So, he's got the longevity in office to back up the claim that he's the G.O.A.T of British Prime Ministers- but there are other things to consider too.

Probably the biggest is Ireland: Gladstone sensed (correctly, as it turned out) that something needed to be done about Ireland and some form of devolution or as it was called back then 'Home Rule' was the most likely solution. Convinced by the rightness of his cause, he tried to force a bill through the Commons once and his government collapsed because of it. Coming back into office for one last time, he tried again and got the bill through the Commons only to see it go down hard in the House of Lords. The Liberal Party actually split over the issue and it kept them out of power as the majority party for at least two decades. I think that was probably the biggest thing I took away from reading this book: Gladstone knew that it was going to split his party. He knew there were going to be long term electoral consequences to this- but he also knew that giving Ireland some form of Home Rule was in the national interest and so he did it anyway. By that point in his career, his domination of both Parliament and his party was such that he was probably the only leader of any stature that could get that done by sheer force of will. He ultimately failed, but one has to wonder how the history of the late 19th and early 20th centuries when it came to Ireland would be different if he had succeeded.

The second thing worth noting, I think is probably electoral reform. I think I need to go back and read that biography of Pitt The Younger to really get a good handle on this, because British advancement toward universal suffrage didn't go in a simple straight line the way America's has*- in America, we went from white men who owned property to white men to (in theory at least) men and then to men and women and finally (in theory at least) everybody. The 19th Century seems to have been a slow, protracted fight about letting more and more people into the franchise while the Establishment/aristocracy/gentry clutched their pearls in horror at the notion of letting gasp the common people actually vote.

Gladstone had some quirks that are sort of hard to get used to- but probably made a lot of sense in the context of the Victorian Age. The early chapters are drowning in various theological debates about disestablishmentarianism (my favorite word) and it's...  complicated. And a little deep, but I think if you can make it through those chapters you'll be okay. Gladstone also had this thing where he would try and reform prostitutes by talking to them. (Also, a little strange.)

Overall: a doorstop of a political biography, Roy Jenkins states his case for Gladstone being the G.O.A.T right at the start and then proceeds to tell you everything you ever possibly wanted to know about Gladstone and 19th Century Politics and then some. Comprehensive and thorough, by the end of the book, Jenkins has made his case. Gladstone might well be the greatest to ever hold the office, but given the current mess of British politics, you can't help but wonder what he'd think of it all. My Grade: Jenkins remains the go-to biographer of British politics and Gladstone is no exception. **** out of ****