This Week In Vexillology #282

February 09, 2019
Our tour of the counties of England continues this week with our next two counties on deck-- now, in a twist, I was going to go with Derbyshire and Leicestershire, but the latter doesn't seem to have a wiki-page for it's flag- and it's flag seems to be that of it's county council and not of the county itself. I think this is the first county I've come across that doesn't have a historical flag or hasn't seen a move to create it's own flag. So for now, I'm going to mull it over and see if I want to include county councils and 'count' them in this tour or not. I might come back to Leicestershire-- I might not. But this week, we're keeping Derbyshire and skipping over to Nottinghamshire instead. 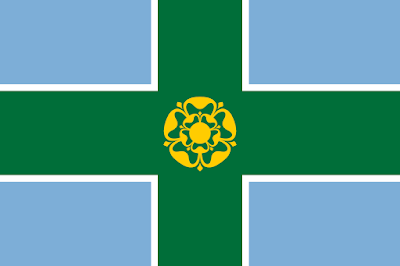 The first and most obvious question: where the hell is Derbyshire? Find Manchester and if you sort of go east from Manchester and find Sheffield and then go dead south from Sheffield until you find Derby and you've found Derbyshire. Very roughly speaking, the county is ringed by Birmingham, Stoke-On-Trent, Manchester, Sheffield, Nottingham and Leicester. What is the county famous for? Well...  there's Bakewell Tarts and Derby County football (one of these days they're going to get promoted to the Premier League) but really, it's the Peak District that gives the county it's natural beauty and probably the large portion of it's 'fame.' Mr. Darcy from Jane Austen's Pride and Prejudice is from Derbyshire. Portions of The Princess Bride were filmed there. D.H Lawrence, Walter Scott and Tom Stoppard have also set various works of literature in the county.

So let's talk about their flag. There's a lot to like about it- it follows a pattern we see in a lot of county flags, using St. George's Cross as a foundation for their own flag, but Derbyshire makes their cross a little thicker than usual, which makes it stand out a little bit. The blue being lighter in color helps the green cross pop out a little more which in turn, focuses your attention more on the rose at the center of the flag. Overall, it's a really effective design.

It was designed by Martin Enright and, like so many county flags, came after someone noticed that another county (specifically, Cornwall) had their own flag and wondered if Derbyshire had something of their own. A campaign was launched and eventually on September 22nd, 2006, the flag was unfurled and subsequently registered with the Flag Institute.

The blue and the green were chose to represent the green countryside of the county as well as it's rivers and reservoirs. The rose at the center of the flag is a Tudor rose, which has been the county badge since the 1470s-- though, it's gold in color, to differentiate it from the emblems of Yorkshire and Lancashire- and the gold also apparently stands for quality. 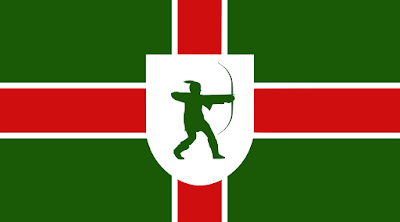 Finding Nottinghamshire is actually pretty simple. Find London on the map and then follow the M-1 north to Leeds and at some point you'll slide past the city of Nottingham. Head slightly north-north east of that until you're more or less directly between Chesterfield and Lincoln and you'll be smack dab in the middle of Nottinghamshire. Located on the Roman Fosse Way, settlement in the region dates back to Roman Times. (Also: if you've ever been to the UK and find yourself on a very straight road for an extended period of time, it's probably Roman.) It shouldn't be a galloping shock to find out that the legend of Robin Hood is very popular here-- but also, Lord Byron and D.H. Lawrence hail from the county and Nottingham Forest is kicking around the English Championship while Notts County and Mansfield Town are toiling in League Two.

So, let's talk about their flag. Again, no surprise that Robin Hood is the central element of the flag. And St. George's Cross appears as a design element again- though, in contrast to the thicker version that Derbyshire uses, this one is more conventional and bordered with a white line. The flag's wiki-page doesn't include an official explanation of the shade of green, but what with Robin Hood being so central to the flag, 'Sherwood Forest' or 'forests in general' seem to be a logical leap that I'm willing to make. The Robin Hood silhouette is specifically James Woodford's bronze statue of Robin Hood which is located in the city of Nottingham.

And that's Derbyshire and Nottinghamshire! Remember, until next time keep your flags flying- FREAK or otherwise!