This Week In Vexillology #277

December 22, 2018
This Week In Vexillology, we're heading back across England for our next two counties on deck in our grand tour of the many flags of England: Worcestershire and Herefordshire.

First up, let's start with the sauciest of England's counties...  Worcestershire! How does one find Worcestershire? Well, it's actually pretty easy because naturally, there's a city called Worcester and it's just southwest of Birmingham. Find it on the map and you're smack dab in the middle of Worcestershire. (The sauce: was created by two chemists- John Wheeley Lea and William Henry Perrins in the first half of the 19th Century and has been generic since 1876 when the High Court of the UK ruled that their company- Lea & Perrins did not own the trademark to 'Worcestershire.')

All right- so let's talk about their flag: 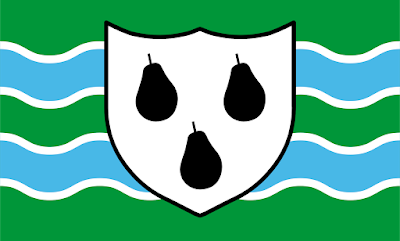 Adopted on April 8, 2013 and registered with the flag institute, it was designed by Elaine Truby who won the contest held by BBC Hereford & Worcester. I'm sensing a theme with a lot of these county flags- because the shield features the county's 'famed black pear' which was used by units from Worcestershire and what battle? Oh that's right: the Battle of Agincourt. The waves of blue represent the flood plain of the River Severn that runs through the county and the green is worn by the county's cricket team. 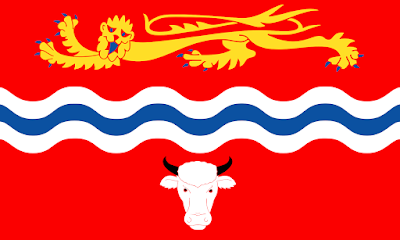 Here's the interesting thing about this flag: it's not yet officially. Nothing has been registered with the flag institutes and there are multiple proposals apparently floating around out there in the ether. But this is what Wikipedia provided me, so we're going to go with this one until they get around to make it official. This particular proposal is actually the Banner of the Arms of the Herefordshire Council- so their Council gets to use it. But, because it's an Armorial Banner, the official explanation is all full of terms from heraldry: "a river running through a red background with a lion passant guardant above and the head of the bull below." I'm assuming the latter is for the county's beef. I'm going to guess that the river is the River Wye.  Not sure what the lion's about or the red though.

Another two counties down! Remember, until next time keep your flags flying- FREAK or otherwise!