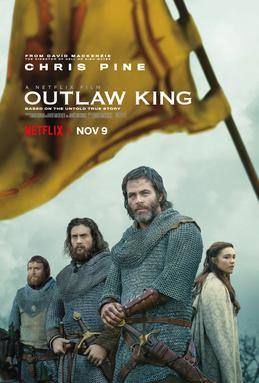 I've been seeing previews and pop-up ads for this for weeks now, so I finally broke down and gave it a watch, curious to see what it would be like. My perception of Robert The Bruce (at least on film) is largely colored by the way he's treated in Braveheart- which was...  odd, if I remember correctly. He was sort of the leader everyone wanted but weak enough to make compromises with the English and betray Wallace- but eventually he turns out okay and wins the day at Bannockburn.

A film that focuses solely on Robert the Bruce? It feels interesting to me. Braveheart was free to tell the story of Wallace with it's embellishments and dubious history, but Robert The Bruce feels more embedded in history than the story Braveheart told. Outlaw King brings his story to life.

First, you've got to give Chris Pine some serious props. Not every actor can carry an accent. (See: Harrison Ford and Liam Neeson in K-19: The Widowmaker) but Pine carries a Scottish accent perfectly throughout this movie. It sounds good and he doesn't overdo it either, which I think helps the cause and keeps him in character more effectively throughout the movie.

The story begins in 1304 outside Stirling Castle where John Comyn (Callan Mulvey), Robert Bruce (Chris Pine) and the rest of the Scottish nobility surrender to King Edward I (Stephen Dillane). During the celebration in the camp, Bruce spars with the Prince of Wales (Billy Howle) and learns that the King has given him his goddaughter, Elizabeth de Burgh (Florence Pugh) to marry. During the celebration, James Douglas (Aaron Taylor-Johnson) arrives to ask for his land back, but King Edward turns him away. Both Prince and King then leave Scotland, leaving it's management to Bruce, Comyn and the head of the English Garrison at Perth, de Valence (Sam Spreuell.)

Two years later, after collecting taxes, Bruce realizes how unpopular the English are when he gets caught in a riot after the public display of the quartered body of William Wallace and he starts planning a revolt. His family and, perhaps surprisingly his English wife, Elizabeth agrees with him. Bruce then tries to persuade John Comyn to join him, but Comyn instead threatens to inform Edward about the plan and Bruce, in a panic, kills him. The clergy of Scotland offer Bruce a pardon, but only on the condition that he accepts the crown of Scotland. He does so- though not many Scottish nobles support him. He heads to Scone anyway where he's crowned the King of the Scots.

Edward I declares him and outlaw and sends Prince Edward to Scotland to find him and capture him. De Valence gets a little too ambitious and moves against Bruce before the Prince arrives- Bruce wishes to avoid bloodshed and challenges De Valence to single combat. The latter accepts, but wants to wait until the next day. Bruce agrees but De Valence launches a surprise attack on their camp at Methven and Robert is forced to flee with only fifty men. He loses a brother to treachery as they attempt to flee and another brother is executed when Prince Edward finds Elizabeth and Bruce's daughter Marjorie. Then, he launches a guerilla campaign against the English, taking castle after castle and burning it, gaining support as he does so.

Finally, Edward I has had enough and goes to Scotland himself to try and end the rebellion once and for all. He dies along the way, leaving Edward II to try and complete the task. The Scots meet the English at the Battle of Louden Hill and despite the odds being against them, defeat the English, securing Scotland's freedom. Bruce is crowned King of Scots- his wife and daughter are eventually returned. Edward II is murdered by his own lords (in a somewhat unpleasant way if you know your history) and eventually, a descendant of Robert The Bruce unites the crowns of England and Scotland.

Overall: It lacks the epic touches of Braveheart, but it's a solid movie that doesn't skimp on the battle scenes and seems to be fairly historically accurate- at least compared to Braveheart. Chris Pine portrays Bruce as a patriot intent on winning back freedom for his people- but the historians seem to think that Bruce would have been more canny and ambitious than warm and personable- which would seem to be more in line to his portrayal in Braveheart. The more restrained story told in Outlaw King, however, makes it a less flamboyant and grand film. I don't think that's a bad thing, however. My Grade: *** out of ****