Netflix & Chill #55: Fantastic Beasts and Where To Find Them 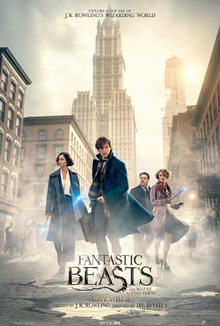 I had been wanting to watch Fantastic Beasts for a long time and finally, I sat down and watched with the kiddos over the weekend and it was... well, I don't really know how to feel about it.

Set in 1926, the film opens with British Wizard Newt Scamadaner (Eddie Redmayne) arriving in New York on his way to Arizona. While wandering around New York. he stumbles across a rally being held by the New Salem Philanthropic Society, whose leader, Mary Lou Barebone (Samantha Morton) is railing against witches and wizards warning the public that they're real and very dangerous. While watching her speech, a Niffler escapes from Newt's magically expanded suitcase and runs into a bank, where it causes havoc as it attempts to steal as many shiny objects as it can get it's hands on. Attempting to retrieve the Niffler, Newt encounters No-Maj (American for 'Muggle') cannery worker Jacob Kowalksi (Dan Fogler) and the unwittingly swap suitcases.

Meanwhile Newt is arrested by MACUSA (Magical Congress of the USA) Witch Tina Goldstein (Katherine Waterston), who is a demoted Auror hoping to regain her position by bringing in Newt as a dealer of illegal magical creatures. Unfortunately, since Jacob and Newt switched suitcases all Newt has is a suitcase full of baked goods and he's released. Back at Jacob's apartment however, the several magical creatures escape from Newt's suitcase.Tina and Newt track down Jacob and the suitcase and then take him back to Tina's apartment where they introduce him to her sister, Queenie (Alison Sudol), who is a Legilimens (mind-reader/telepath.) Together, they track down the missing creatures from Newt's suitcase getting two out of three before Tina returns the suitcase to MACUSA. They get arrested again and sentenced to death (which seems like a massive escalation, IMHO, but hey, something creepy killed a Senator, so it has to be one of Newt's creatures.)

Incredibly, they escape yet again and track down the true source of the attack: an Obscurial, which is a magical parasite that can develop in magic children when they suppress their abilities. Turns out that Credence (Ezra Miller) who is a child being raised by witch hater Mary Lou Barebone is the host of the Obscurial- a very powerful one indeed. After a final confrontation, Credence is disintegrated and Graves (Colin Farrell) is revealed the be none other than Grindelwald (Johnny Depp) himself.

Hell, even after summarizing this movie I'm still not sure how to feel about it. Are there Fantastic Beasts? There sure are. Should they be more central to the plot? Definitely. I don't care about Credence (a waste of Ezra Miller) or Mary Lou Barebone (a waste of Samantha Morton.) Also, Jon Voight is in this movie for like a minute and a half and I don't know why. And don't even get me started on Colin Farrell... his entire character was a waste of space and a massive waste of his not inconsiderable talents.

This movie feels like two stories mashed into one and it would have been far better if Newt had come to America searching for a fantastic beast instead of being on his way to Arizona to release one. If you're going to call a  movie 'Fantastic Beasts and Where To Find Them' there should be more fantastic beasts and more finding of them- but hey, that's just my crazy notion. I don't care enough about MACUSA or Grindelwald to be really all that interested in the political machinations and rules all that much and that's kind of a shame, because that part of the story seems considerably more important than the Fantastic Beasts part of it.

Had it been me, I would have Newt on the hunt for a Fantastic Beast that could only be found in America. I would have had him visit Ilvermorny instead of just hearing about and if you must bring Grindelwald into this mess, have him be after the same beast that Newt is and that's your final confrontation. I'm assuming that the business with Credence is going to get explained in the next movie- but I don't like movies that set up their sequels in such annoying ways.

Overall: [shrug emoji], this movie could have probably should have been so much more than it was. It starts out with such promise- it looks like it's going to be Newt's story and his movie as well, but ends up being all about Grindelwald and I'm not sure how to feel about that. Also: given how talented this cast is, they sure underuse a lot of really great actors in this movie. In general, this feels like a cake without the frosting. Tasty enough, but not nearly as delicious as it could have been. My Grade: ** out of ****