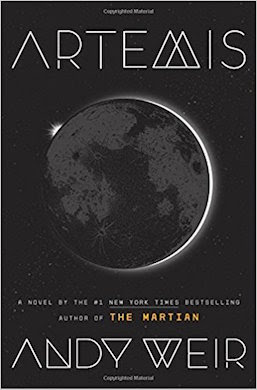 The Martian was such a good book that when Andy Weir wrote a sequel called Artemis, I knew I was going to have to grab it and read it at some point. Happily, Christmas of last year was good to me and it's been sitting in my queue until about a month ago, when, frustrated with Thomas Pynchon and Gravity's Rainbow, I decided to pick it up and use it as a 'palate cleanser' to keep  my sanity as I trudge on through Gravity's Rainbow.

As palate cleansers go, it was exactly what I needed. However, Weir established himself as an author of fast-paced massively entertaining books with The Martian and suffers no sophomore slump with Artemis- it went fast- probably too fast to be honest, but what can you do with a book that you don't want to put down?

The story opens in Artemis, the first city on the moon, where porter and part-time smuggler Jazz Bashara delivers some contraband to wealthy businessman Trond Landvik- Jazz knows both Landvik and his daughter Lene quite well, but on this particular occasion they're entertaining a new associate, by the name of Jin Chu, who holds a case marked with the name ZAFO. Trond offers Jazz a big score: he wants to take over Sanchez Aluminum, whose by products help produce oxygen for the entire city. The score is easy: smash their harvesters and then Trond will appear with a supply of oxygen and the equipment and money necessary to take over their contract.

The money is too good for Jazz to say no so she borrows some welding equipment from her estranged father, Ammar and gets a small robot called HIB from an associate of his. She disguises herself as a tourist and visits the Apollo 11 site, placing HIB outside the airlock and positioning him so he can open the airlock for her. Another friend of hers makes a device that makes it appear as if she's still in her quarters- so the next day she sets out across the moon to where the harvesters are working and manages to destroy all but one. She's spotted and eventually caught upon her return to the city by Dale, her former friend. He agrees to remain silent if she agrees to be friends again, which she reluctantly does.

Heading back to Trond's place, she finds him and his bodyguard murdered- and putting two and two together hunts down the associate she saw at his house, Jin Chu. He lures her into a trap with Trond's killer, but Jazz manages to escape with the mysterious case labelled ZAFO in tow. They're soon both taken into custody by the city's police chief, Rudy.

Soon Jazz finds out the truth: ZAFO represents a major advance in fiber optics, virtually eliminating the attenuation factor that normal fiber cables provides and eliminates the need for repeaters as well- and here's the real kicker: the only place it can manufactured is outside of Earth's gravity- and it turns out the Brazilian company that controls Sanchez Aluminum is in fact, a crime syndicate who has sent an assassin to the moon to clean up the competition. (Namely: Trond.) If they're allowed to control ZAFO, they'll effectively run the city.

Jazz and her friends decide not to let that happen by destroying the smelter belonging to Sanchez aluminum, which would let Trond's daughter Lene seize their contracts and rebuild. They break into the plant and destroy the smelter, but create a deadly backflow of chloroform into the city. They race back to the city, trying to reach Trond's oxygen supplies in time and Jazz sacrifices herself to save the city- but gets rescued by Dale.

When she's fully recovered, Lene pays Jazz what her father promised he would. Jazz buys her father a new welding shop to replace one she destroyed as a teenager, but then ends up paying the rest to a city administrator to avoid deportation- and she convinces the administrator of her value as an 'authorized' smuggler who keeps undesirables out. With lucrative opportunities on the horizon thanks to ZAFO Jazz, back at square one gets back to work.

Overall: Fast-paced, entertaining and almost impossible to put down, Weir's jump from Mars to the Moon is perfectly executed and leaves the reader wanting more. If you think this is tailor made for the big screen, well so did Hollywood. There's a movie already in development aiming for a 2020 release date. Weir has some interesting touches: Kenya is the power behind Artemis, thanks to a far seeing economic minister who lands a massive private space investment for her country and leverages it to become administrator of Artemis. There's also a refreshing diversity of countries that move beyond the usual 'space countries' like America and Russia. Put together it makes for a thrilling and believable vision of the future. My Grade: **** out of *****