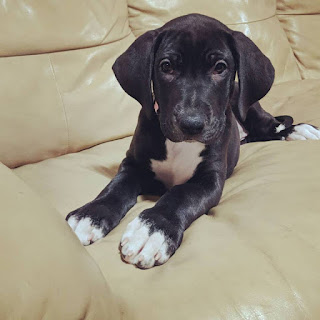 So, we got a dog. (Just one dog, this time.) Her name is Tallulah and she's a Great Dane. The decision to get a dog was a long time in coming. We lost both Winston and Sophie very quickly and the fact that it was so quick I think made us not want to rush into getting another dog quickly. There was something relatively nice about being dog free- at least for a while. You don't have to worry about your cats as much if you want to sneak off for a weekend- you can just throw extra food down and they'll leave you little piles of puke and hairballs here and there as thanks.

But, after a while...  you start to miss dogs. Cats can be affectionate. Cats can be loving, even. But only when they want too. You started to miss someone who is always happy to see you, no matter what. But we didn't want to rush into anything- both the Missus and I did research. We looked at breeders. We really thought about how much we both work and how much time we would have for a new dog. We knew we didn't want a small dog. A high energy dog probably wasn't a good fit for us either- though the Missus had a Boxer growing up and I had always liked that breed.

We thought about Bernadoodles, but then we looked at the price. We checked into Newfies and Bernese Mountain Dogs- but again, the price on the former and some sketchiness on the latter (at least on the website with the breeder we checked out.) Then, we found some Great Dane puppies up in Cedar Rapids.

The Missus and I had thought about Great Danes before. A co-worker of hers has Great Danes and spoke highly of the breed. Everything seemed to fall into place: the price point was good. We met the Mama and saw the environment the puppies were kept in. We looked for the right temperament. We checked into birth order.  And then, we went ahead and did it- we didn't run out and drop a chunk of change on any old dog. We sort of got this dog the way grown up, responsible pet owners should. (Which given the fact that our menagerie at its height included three cats and two dogs, is kind of an improvement I think.)

Miss Tallulah is a puppy, so she does plenty of puppy things- chewing, playing, figuring out the cats. But she's also a sweetheart. She cuddles with everyone. Loves all the boys- though Lachlan isn't a fan of her, as she tends to love him a little too enthusiastically when he's crawling around on the floor. Appropriately enough, to paraphrase the President, it appears that she's 'gonna be yuuuuuuuuge' which will be new and different for us- but we've always wanted a big huge dog and I think that's what we're going to get.

She's a great addition to our family so far- and we couldn't be happier.