This Week In Vexillology #276

Oxfordshire is kind of easy: find London on a map, head northwest until you find Oxford and believe it or not, there's some logic here, because Oxford is, in fact, smack dab in the center of Oxfordshire. (Crazy! Who knew!). Berkshire, on the other hand gets a little harder to pin down due to it's status. It's one of the historic home counties of England, but it's ceremonial, historic and a 'non-metropolitan county without a county council'. Because Windsor Castle is located within its traditional boundaries, the Queen recognized it as the 'Royal County of Berkshire' back in 1957.

According to the counties wiki-page, it's been governed by six unitary authorities: Bracknell Forest, Reading, Slough, West Berkshire, Windsor and Maidenhead and Wokingham. So...  it's kind of an interesting case. If you find Reading on a map and kind of follow the M4 past Newbury onto the North Wessex Downs that's more or less where Berkshire is. It's actually the one county so far that doesn't show up on Google Maps when you google it. 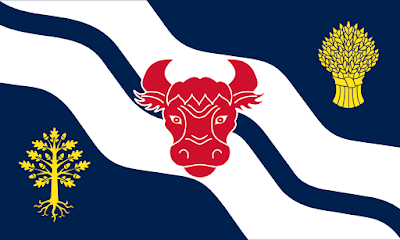 First impressions: this is a bad ass flag. That bull looks like it's going to mess you up, which is sort of at odds with my general impressions of Oxford. It's a beautiful, idyllic university town which is the home of Inspector Morse, who doesn't exactly seem like he's a Detective straight out of Homicide: Life On The Streets. I love the diagonal across the middle- it sort of pulls the whole damn design together. I would buy this flag. Hell, I would get a flagpole and fly this flag.

This flag was officially registered with the Flag Institute on October 9th 2017. The basic field color of dark blue is associated with Oxford University. The long, wavy white stripes symbolize the River Thames and on top of that sits the red ox head (Oxford, of course is the place where the ox fords the river.) The sheaf of wheat in the upper right hand corner and the tree in the lower left hand corner represents the woodlands and agriculture of the county. 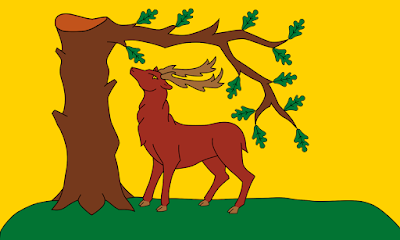 First impressions: this flag is...  underwhelming. The phrase 'look what I made with MS paint' sprung into my head but I realize that's probably a little unfair. It was recognized by the Flag Institute on March 2nd 2017 and is considered a traditional flag. The symbol of the stag and oak dates back to "Michael Drayton's 1627 poem Battle of Agincourt, where he describes the men of Berkshire under the symbol of "a Stag, under an Oake that stood."" The stag has twelve points on his antlers- which is a reference to the 'royal stags' and the counties position as a Royal County. Together, the stag and the oak represent the county's forestry and deer herds.

And that's the flags of Oxfordshire and Berkshire! Remember, until next time keep your flags flying- FREAK or otherwise!