This Week In Vexillology #275

December 01, 2018
This Week In Vexillology is finally back! I sort of put everything on the back burner to focus on my third novel for NANOWRIMO, so blogging has been light for a month now- but I'm back and I'm ready to get after it again and what better way to do that than to continue our Tour of the Counties of England with the next two counties up: Kent and Essex. 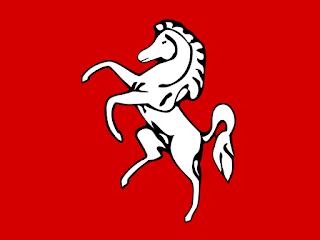 Here's the thing: I've been to Kent... I tagged along with an Aunt and Uncle for a trip down there one summer and it's beautiful. The houses have all these weird, white little chimneys- the views south east toward Dover are beautiful. There's tons of history there-- we saw Cantebury, we saw Dover Castle... It was amazing and I'd love to show y'all a photo or two of the place, but here's the thing: I can seem to find any at the moment. (I'm going to work on that some.)

Oh, the directions are even simple: find Dover and you're in Kent. (Easy enough, right?)

Their flag is beautiful... the white horse has been a symbol of Kent dating back to the old Jutish Kingdom of Kent back in the 6th Century. The current flag dates all the way back to 1605 and was used by the Justices of Kent for many years. The arms featuring the horse were granted to the Kent County Council on October 17th, 1933 and again in 1975. The flag was accepted as official on the basis of it's traditional use and historic roots with the county.

I am... somewhat shook by this flag, kids. Consider the following video clip:

This pretty much sums up Essex quite nicely. It's sort of a weird blend of New Jersey and Laguna Beach? (Weird could also be 'hellish') but it seems to work. Don't really have a good explanation on what the flag means. Wikipedia has a one sentence description: "The flag of Essex is ancient in origin and features three Saxon seaxes on a red field." And that is it. But I also love the contrast between the video clip above and the flag. This is not the flag that I would have expected Essex to have. Which in and of itself is the most Essex thing ever.

And there's the next two flags of the counties of England... remember until next time keep your flags flying- FREAK or otherwise!