This Week In Vexillology #182

September 17, 2016
This Week In Vexillology, we're still running around Southeast Asia, slipping just over the border from Laos to take a look at the flag of it's next door neighbor, Thailand: 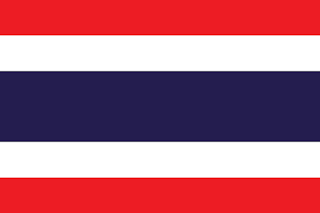 The interesting thing about the flag of Thailand is the evolution it's had over the centuries. The first flag of Thailand (then called Siam) was a plain red one that made it's debut around the middle of the 17th Century. A white chakra was added around the end of 18th Century and then an elephant was placed inside in during the early parts of the 19th Century. From the middle of the 19th Century until the flag assumed it's present form in 1917, Thailand doubled down on the elephant, going for a large white one, facing the hoist of the flag, once again on the field of red- first without any regalia and then for awhile with some regalia on board for the ride.

Then 1917 rolled around and King Rama VI entered World War I on the side of the Allies and this flag emerged not long after. The colors are said to represent the unofficial motto of Thailand: 'nation-religion-king.' The red stands for the land and the people, the white for religion and the blue for the Monarchy. The fact that they entered the war for the Allies was also noted as red, white and blue were all the colors in the flags of the main Allied powers as well.

Per Wikipedia, the impetus for change came from a flood, where the King at the time saw the old flag hanging upside down. Wanting to prevent that from happening again, he changed to a symmetrical flag. The middle color was originally a lighter shade of blue, but was changed to dark blue/indigo which was seen as an auspicious color for Saturdays which was the day the King was born.

And that's the flag of Thailand! Remember, until next time keep your flags flying- FREAK or otherwise!