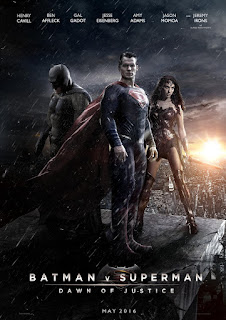 For reasons passing understanding, I signed up for a double over Labor Day Weekend and, with the Missus and the Kiddos heading up to visit the Mother-in-Law and The Nieces, I did my best to stay up a little later than usual the night before so I wouldn't be completely wrecked for the overnight portion of my double the next day. My movie of choice? Batman v Superman: Dawn of Justice...

I had sort of been of two minds about this movie when it was kicking around the theaters in the spring. Part of me wanted to try and find a time to go and see it, but part of me also thought that it seemed like a solid lock for a RedBox rental and it turns out that latter instinct was right. Don't get me wrong: it wasn't a bad movie, in fact, it was pretty solid and there was moments and flashes of brilliance and the outlines of something really really good were visible throughout the movie.

But, I think they still haven't quite figured out Superman* yet. I don't hate Henry Cavill in the role and Amy Adams is great as Lois Lane, but their relationship feels...  I don't know if 'underdone' is quite the right word, but it, lacks context. There's a great moment at the end of the film, where Superman is about to do the last great climactic thing in spoiler-free climax of the movie and he looks over at Lois Lane and says, 'this is my world.' And you feel the emotion of that moment and then you find yourself wishing that the movie had made that true. Both Man of Steel and Batman v Superman want to make Superman be both an alien and separate from this world and yet part of this world at the same time. Yet they haven't been able to pull it off. He just feels like a loner who can fly and do shit with his eyes.

The character who carries this movie though, is Batman. I was dubious about Ben Affleck stepping into the role, but you know what? It works. It really, really works... his motivation for wanting to take down Superman is perfectly placed in a post-9/11 world and the movie makes it clear from the start: the carnage and destruction in Metropolis at the end of Man of Steel has consequences, one of which is Batman wanting to kick your ass. While I wasn't crazy at seeing the origin of Batman and the death of Bruce Wayne's parents for about the one millionth time on screen- I mean, is there anyone alive in the world today that doesn't know what Batman's origin story actually is at this point? Between you know, Batman, the movies, and the video games, we all know. We get it.

The appearance of Wonder Woman was probably the highlight of the movie. She. Kicked. Ass. Plus, I love the way that they handled introducing her. She just showed up. And Bruce Wayne finds out that she's been around for a long, long time.

Does Jesse Eisenberg work as Lex Luthor? Meh. Yes and no. He's nicely twitchy and eccentric, but by the end he seems to have tipped over beyond twitchy and into just plumb crazy. Maybe I don't know enough about the character of Lex Luthor in the zeitgeist, but to me, it's ambition, power and greed that are the cornerstones of that character, whereas the Joker tends to go into the little more 'crazy-ass' area of things. Eisenberg seemed to be more Joker than Luthor by the end of the movie, but overall I would say that Eisenberg manages to actually inhabit the role more effectively than his predecessors. I haven't seen too much of Gene Hackman's take on the character and any cheesiness for Kevin Spacey as more than made up for by the fact that he's just having so much damn fun in the role.

The final third of the movie sort of lost me a little bit. Everything felt very ponderous and unwieldy. Every one is very sad at the end even though it's only been eighteen months since Superman showed up in the first place. It's...  jarring. Or, it might have been creeping past the three a.m. hour and I was starting to fall asleep. Not sure which.

Overall: Decent movie. Batman is great, Wonder Woman is awesome, there's bones of an excellent movie here that doesn't quite emerge, but as a prologue/set-up movie for Justice League it works quite well. I'd say ** 1/2 out of ****.

*To me, Smallville is the only Superman that's clicked with me. At the heart of the story, Superman is about an alien trying to figure his shit out and where his place in the world actually is. The process of growing up fits that to a T. And it's a shame that the CW didn't call Tom Welling off the bench to suit up for Supergirl, because that would have been amaaaaaaaazing.