This Week In Vexillology #181

September 10, 2016
This Week In Vexillology, we're heading down into Southeast Asia to take a look at the flag of a country that's actually had a passing mention or two in the news this week thanks to President Obama. That's right, it's the flag of Laos! 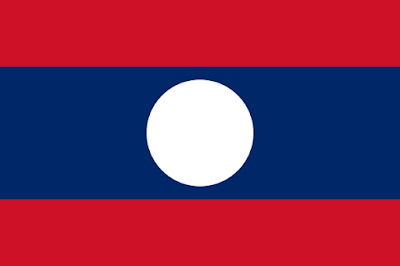 In the great cultural zeitgeist of contemporary American pop culture, Laos is probably on people's radar mainly due to King of the Hill, but if you go back a little further in our history, there's that whole secret bombing of the place ordered by everyone's favorite President, Richard Nixon. So, we've got some not-so-nice history with the country.

While Laos as a country is a relatively new concept, it's precursor was the Kingdom of Lan Xang, which lasted from 1354-1707 and was a major power in Southeast Asia during that period- it provided the cultural and political foundation for the state of Laos that exists today- and indeed, until the Communist regime began in 1975, Laos was a monarchy. (Coolest thing about Lan Xang Hom Khao is the translation of the name, literally: 'The Kingdom of a Million Elephants Under The White Parasol.')

Another uncomfortable truth about Laos: between 1964 and 1973, we made Laos the most heavily bombed country on Earth with B-52's dropping an average of one bomb load, every eight minutes, 24 hours a day. More ordinance that was dropped during the World War II as a whole. (h/t to Wikipedia for that sad statistic.)

First of all, it's rare among Communist states: other than Cuba, Laos is the only communist country to have a flag with no obvious communist symbols. It was also first adopted between 1945-1949 by the Lao Issara movement which was actually non-Communist and nationalist- and aimed to prevent the French from restoring their control over Laos after World War II. When that failed, they disbanded in 1949, but the Communist regime brought back the flag when they assumed control after the Civil War in 1975.

Then, there's the symbolism of the flag itself. The white disk represents the unity of the Lao people (which includes a nod for future reunification of Laos with the Laotian region of Northeastern Thailand.) It's also meant to represent a full moon over the Mekong River. The red stripes represent the blood shed on both banks of the Mekong in their struggle for independence from the French. The blue, of course, represents the Mekong River, a symbol of prosperity for the country.