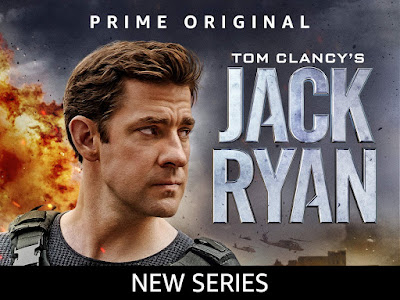 I wanted to watch this show for a couple of reasons. First, Amazon has been promoting the shit out of it since like March, which seemed ridiculous to me, but for months now, you couldn't go anywhere on Amazon without seeing some trailer or banner ad for it. So if you're going to hype a show at me that much, I'm going to want to tune into to see if it lives up to the hype.

Second, I love this character. Growing up, I read pretty much every Tom Clancy book I could get my hands on- great, thick tomes, all of them. So the idea of Jack Ryan moving to the small screen intrigued me greatly. I didn't like Ben Affleck in The Sum of All Fears. I didn't even bother with Chris Pine in Jack Ryan: Shadow Recruit. So I was more than willing to give John Krasinski a shot in the role occupied by the latter two as well as Harrison Ford and Alec Baldwin.

The great part: it all works really, really well. The first season is only eight episodes, which I think helps immensely, because there's no filler here. They know what story they want to tell and they don't waste time telling it- but it's also not so jam packed that they don't allow for character development and nuance either. When the series of opens, Jack Ryan (John Krasinski) is a low-level financial analyst in the Terror, Finance and Arms Division (T-FAD) of the CIA. He's been tracking financial transactions that he believes are connected to an emerging terrorist named Suleiman whom he belives is operating out of Yemen. He has a hard time convincing his new boss, James Greer (Wendell Pierce) of this and eventually heads out to a cocktail party where he meets Cathy Mueller (Abby Cornish) the daughter of his former boss from the financial firm he used to work at on Wall Street.

Greer realizes that Ryan is onto something and sends a helicopter to the party to whisk him away and soon Jack is away from the comfort of his desk job and out in the field. They had to Yemen, where they interrogate the man supposedly responsible for the payments and his bodyguard when the camp comes under attack and they realize that the bodyguard is none other than Suleiman (Ali Suliman). He's rescued and Jack and Greer are left with the realization that a new and dangerous player has joined the terrorist game.

Back in the states, Jack reconnects with Cathy and keeps following the phone records and other intelligence they had gleaned from the Yemen incident which leads them an apartment outside of Paris where Suleiman's brother, Ali (Haaz Sleiman) is transferring the funds. Greer, Ryan and French Intelligence raid the apartment, but Ali escapes in the chaos and the raid ends in a suicide bombing. Greer and Ryan track Ali to a hideout they believe is his rendezvous point in Southern France, but in their attempt to take him into custody, he's killed.

Meanwhile, Suleiman's wife Hanin (Dina Shihabi) becomes increasingly concerned with the armed terrorists that her husband is bringing into their home and begins to realize that her husband has another, darker side that she's never seen before. She flees with her daughters, but Suleiman sends someone after her.

While Hanin is being pursued, Suleiman starts an insurrection against ISIS and effectively takes control of the organization. His terrorist cell stages a sarin gas attack on the funeral of a well-known French priest. In the aftermath, Jack makes contact with Suleiman using the messaging board on a video game, posing as his brother Ali- but Suleiman detects the ruse and Jack confirms that Ali is dead and manages also to confirm that Suleiman's wife, Hanin has fled before Suleiman disconnects, which sends Greer and Ryan racing to the Middle East to find and extract her.

Cathy, meanwhile, is investigating a case of Ebola in Liberia where a man has been infected with a strain they believed was eradicated. It is then revealed that six months earlier Suleiman and Ali dug up a body infected with that strain. Greer and Ryan catch up with Hanin and her children and extract them safely. Ryan and Greer investigate the Ebola case, which reveals Jack's true job to Cathy who isn't exactly happy at the news, but eventually forgives him. Ryan and Greer also convince their superior to launch a ground assault on Suleiman's compound when they discover the existence of a dozen or so western hostages. All hostages are rescued, but the compound is empty and neither Ryan nor Greer can figure out why at first, until they realize that the hostages (including an old army buddy of the President's) have all been exposed to Ebola.

With the President a numerous other officials quarantined, the next stage of Suleiman's plan- detonating a cesium dirty bomb inside the hospital is revealed and is almost successful, but Ryan and Greer make one last timely intervention which culminates in Ryan shooting Suleiman before he can detonate the device. As rewards for preventing the attack, Greer is promoted to Deputy Station Chief, Moscow Station and Ryan takes over as the head of T-FAD.

Overall, there is so so so much to like about this. The characters are complicated and nuanced and all of them felt fully realized and three dimensional. This series gets right what a lot of the movie adaptations don't: it's possible to update a lot of Clancy's source material to a contemporary setting and they get it absolutely right. Ryan worked in finance, Cathy's Dad was his boss. He had been in the Marines and was gravely injured in a  helicopter crash- though in Afghanistan this time. Greer is almost perfectly cast with Wendell Pierce assuming the role that James Earl Jones played so well in the movies. A nice twist though is the reveal that his character converted to Islam for his now ex-wife. I didn't see that coming at all and the fact that he converted adds an unusual and fresh dimension to the character. All in all, this is taut, thrilling, crackling with suspense and the complexity that made Clancy's novels so great to read.

The problem with Clancy's source material is that a lot of it was written in a Cold War context that's incredibly dated now. Jack Ryan proves that the best of the source material can be updated to a contemporary setting while staying true to what made the originals works so great. I can't wait to see more. My Grade: **** out of ****