Bookshot #111: The Hero With A Thousand Faces 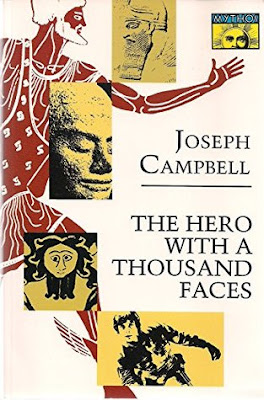 I've always loved mythology ever since I was a kid. I devoured Greek myths. I was that kid who read The Illiad and The Odyssey multiple times and enjoyed them greatly when I did so. I still get irrationally angry about what Disney did to Hercules. (Spoiler Alert: they royally fucked it up. Hades was never the bad guy, Hera was. Kevin Sorbo and  Hercules: The Legendary Journeys does a far better job at staying true to the mythology.) So, it's kind of surprising to me that it's taken this long to pick up Joseph Campbell's The Hero With A Thousand Faces and read it.

The heart of the book is Campbell's theory that the important myths from around the world have survived for thousands of years because they all share a similar and important structure, which Campbell calls the 'monomyth.' Campbell explores this myth and it's structure throughout the book- but does so in a fairly unusual way that kind of through me a little bit at first, but by the end of the book, begins to make a lot more sense. Instead of what I would have done, which would be to explore the similarities between individual myths from around the world, Campbell lays out various stages of a hero's journey and finds the myths from all over the world to provide evidence for that journey.

His hero's journey goes a little like this: the hero receives a 'call to adventure', if he accepts that call, then he has to overcome various tasks and trials along the way- either alone or with the help of others. At the climax of the journey, the hero survives a severe challenge- if they survive, they get a boon or a gift of some kind. The hero then has to decide whether or not to return to the ordinary world with their boon or gift of some kind- and if they survive the return journey, then their boon usually brings some tangible good or improvement for the world.

Not all myths contain the complete cycle of the hero's journey- some only focus on a party of it, or deal with the stages , but inevitably, traces of the cycle can be found in myths from across the world. Some of these stand out as being more complete than others. The stories of Osiris, Prometheus, Buddha, Moses, Mohammed and Jesus are all compared throughout various parts of the book and their similarities are talked about at some length.

The influence of this book on the popular culture of the past few decades cannot be overlooked: Bob Dylan, George Lucas (for Star Wars), Jim Morrison, The Grateful Dead, Stanley Kubrick, Disney cites it's influence on Aladdin, The Lion King and Beauty and The Beast. It's been used by JK Rowling, Richard Adams and Neil Gaiman. (There's also mentions of Community, Lost, The Matrix Trilogy...) So in other words: this idea of the monomyth and the hero's journey is an incredibly important one that had more of an impact on our culture than I previously thought.

I have this feeling that this is a book I'm going to come back to again and again and again. If it left me with an impression, it was that you could read it a dozen different times and learn something new each time. As a result though, my reading felt shallow at times- like I wasn't getting to the bone of the narrative. What I did love was exploring the different myths from around the world and seeing how similar they are. When Campbell says 'around the world' he means it and you delve into myths as close as the American southwest and as far away as New Zealand. (It (sadly) didn't occur to me when I was reading the book, but one of the criticisms of the book involves Campbell's repeated look at mythology from a masculine point of view, but he had a pretty good thought about that.)

Overall: I love mythology, so of course I loved every minute of this book. But I also loved the deeper meaning behind it...  it's easy to see why it's had such an influence on so many artists of various mediums over the year. The monomyth speaks to humanity's deeper struggle find meaning in the world. My Grade: **** out of ****