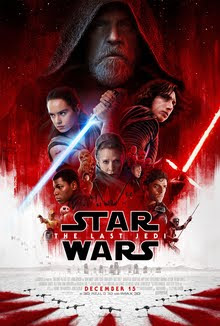 The Last Jedi picks up right where The Force Awakens left off, with Rey (Daisy Ridley) handing Luke Skywalker (Mark Hamill) his old lightsaber on the planet of Ach-To. He throws it away and reveals to Rey that he has no interest in joining the Resistance and has, in fact, exiled himself from The Force in the wake of his failure to train Kylo Ren to be a Jedi. R2-D2 persuades Luke to train Rey as a Jedi, but unbeknownst to Luke, Rey and Kylo (Adam Driver) begin communicating through the Force, which puzzles the two of them at first, but they gradually begin to have visions of the future where they're partners.

The Resistance, meanwhile, is on the run following the attack on Starkiller Base. Poe Dameron (Oscar Isaac) organizes a counterattack that takes out the First Order dreadnought, which allows the rest of the fleet to escape to hyperspace, but the Resistance soon realizes that the First Order is tracking them through hyperspace and the attacks continue. Kylo Ren goes out in a TIE fighter and hesitates to attach the bridge of the lead Resistance ship when he senses the presence of his mother, Leia (Carrie Fisher). His wingmen, however, have no such hesitation and blow up the bridge, destroying most of the Resistance leadership, and incapacitating Leia, who only survives by using the Force. The new leader, Vice Admiral Holdo (Laura Dern) sets coordinates to an old rebellion base (though she doesn't tell anyone that.)

Disagreeing with the strategy, Poe helps Finn (John Boyega), BB-8 and the mechanic Rose Tico (Kellie Marie Tran) to go to the planet of Canto Bight in an attempting to find the source and location of the First Order's tracker, using the services of DJ (Benicio Del Toro), an underworld code breaker.

While the others are on Canto Bight, Kylo reveals what really happened between him and Luke that caused him to choose the dark side of the force to Rey and when confronted with this, Luke confesses that for a moment, he thought about killing Kylo when he sensed that Snoke (Andy Serkis) was corrupting him, but only for a moment- but it was long enough that Kylo destroyed the new Jedi Order in retaliation. Rey is convinced that Kylo can be redeemed, so leaves to go and try and do that, without Luke. Luke prepares to burn down the Jedi Temple, but hesitates to do so- Yoda's (Frank Oz) ghost then appears and summons a bolt of lightning to set it alight, telling Luke that Rey has all that she needs to learn and tells Luke to learn from his failures.

Holdo reveals her plan: to evacuate the remaining Resistance members using transports. Poe believes her actions cowardly and leads a mutiny against her while Finn, Rose and BB-8 infiltrate the resistance ship, where Finn and Rose are captured by Captain Phasma (Gwendoline Christie). Rey also lands on the ship and Kylo brings her to Snoke, who claims to have facilitated her mental connection with Kylo to bring them together in his presence. They struggle and eventually after a plot twist, Kylo and Rey fight over Luke's lightsaber which splits in two.

Leia recovers and stuns Poe, which allows the evacuation to begin- but when DJ double crosses Finn and Rose, their plan to escape undetected is revealed and the transport ships are destroyed. Holdo then sacrifices herself by taking her ship into hyperspace and ramming into Snoke's ship. Rey escapes in the chaos and so do Finn and Rose and they all end up on Crait for one, last desperate stand against the First Order. Rey draws the TIE fighters off in the Falcon, and Luke shows up to do battle with Kylo Ren, buying time for the Resistance to escape- sacrificing his life in the process. The Rebellion, Leia declares, is reborn.

I think merely the return of Star Wars with The Force Awakens was going to get people excited and for sure, it was a great return of the franchise, but The Last Jedi takes everything up a notch. It grabs you by the scruff of the neck and starts running faster and faster and faster, jam packed with action and great character moments and a sense of pulse-pounding urgency that never lets up until the final confrontation at the end of the film. You almost miss with Rian Johnson is building to, because you're having so much fun and the movie seems fully intent on making the Kessel Run in less than twelve parsecs, it's moving that fast, but the final confrontation on Crait is a beautiful confrontation that is epic movie-making at it's finest. I don't understand how people could hate this film, because I enjoyed every second of it.

Overall, Star Wars came back at a solid 8 and The Last Jedi dials everything up to 11 with epic results. The scenes between Mark Hamill and Carrie Fisher are especially poignant, given her passing not long after this film ended and it absolutely sets up Episode IX for an absolutely spectacular finish and raises the pressure on J.J. Abrams to stick the landing on this new trilogy. The bar has been set very, very high with The Last Jedi. I can't wait to find out if Episode IX can clear it. My Grade: **** out of ****